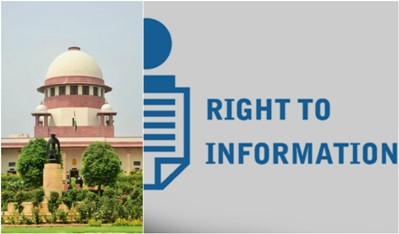 The Supreme Court has done well to bring the office of the Chief Justice of India under the RTI Act. It was the Delhi High Court which had first ruled that the CJI's office should come under the said act. The five-judge apex court bench has now confirmed the same, but with certain qualifications. It has asked Information Commissioners under the RTI Act to bear in mind that the independence of the judiciary and the right to privacy is not compromised before accepting applications.

The ordinary citizen will be able to seek information on appointments and transfers of judges to high courts and the Supreme Court but he or she will not be allowed to know the reasons behind the decisions. This is mainly because the collegium decisions are based on inputs about the judges from the Intelligence Bureau (IB) and the IB is not under the RTI Act. Hence, any information a citizen seeks about why the decision to transfer a judge was taken would in all probability be met with the standard reply that it was based on IB inputs and hence cannot be disclosed.

But the very fact that the court has decided to be transparent is a reason to celebrate. For, citing independence of the judiciary, many administrative decisions of the office of the CJI are shrouded in secrecy. In a highly controversial and much-publicized move, five judges of the Supreme Court, including the current CJI, Justice Ranjan Gogoi, had gone public with their grouse against the then CJI Justice Dipak Misra, alleging that he was being partial in allotting high profile cases to junior judges. Yet after he became the CJI, Justice Ranjan Gogoi discontinued the practice of publishing the decisions of the collegium, along with the reasons, on the Supreme Court website, something that Justice Misra had started. That was a blow to transparency. The reluctance of the judiciary to disclose its decisions can be seen from this reversal.

Although it will be wrong to expect the moon from the verdict, it is a step in the right direction. There must be more transparency in the administrative decisions of the apex court. The case was remarkable for the fact that the administrative side of the judiciary was a litigant before the judicial side and the latter decided against itself. It is certain that greater judicial accountability will ensue after this verdict as the insulation the apex court had used citing independence of the judiciary will now come to an end, to a large extent.