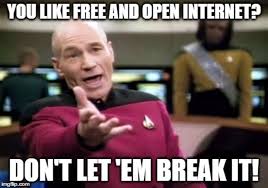 By our team of in-house writers. View all posts by this Author
Picture courtesy trak.in

Airtel does not believe in the maxim that Ã¢â¬Åconsumer is king.Ã¢â¬Â It wants to play favourite among the various websites and apps (short for applications, the ubiquitous tool that is making life easy for people using a smart phone) that are available for download and use on the Net. In a scheme grandiosely named Ã¢â¬ËAirtel ZeroÃ¢â¬â ¢ it is trying to derive revenues from websites and app providers for using its network. Hence it will restrict use of apps to only those that join its Airtel Zero scheme. This will destroy what has come to be known as net neutrality, where apart from charging you for the initial set up and subsequent data charges as per usage in time based (daily, weekly or monthly) or data based (per kb, mb or gb) methods, telcos or data carriers, doubling up as Internet Service Providers (ISP,) do not restrict the usage, bandwith or demand payment for other services, either from the customer or from content providers like websites and apps.

AirtelÃ¢â¬â ¢s thinks logic is simple and makes business sense. As a business entity that is allowing the app providers or websites to provide services to its users, it thinks that it deserves to get a slice of the pie since it is helping them make money by allowing them free carriage on its network. Telecommunications might work that way. Telcos make a huge amount of money by providing short codes to television shows and others that get millions of user responses in a matter of days. The responders know that these messages will be charged differently, sometimes as high as Rs 7 to 10 per message, but since there is an element of participating in a lucky draw or other prize winning game show, people send these messages despite the high charges. The content providers and the telcos share the revenue generated. But the internet does not work that way. Not all websites or apps are there to make money. A lot of individuals publish on the net and they will never be able to match payments by big websites. AirtelÃ¢â¬â ¢s plan will fall foul of Article 19 for starters. Further, if one needs to keep track of share quotations and downloads an app from the internet to do so, one knows one is not going to be charged anything extra for it. This is a free service the app provider is providing. Of course some app providers generate revenue by displaying third party advertisements on their apps, but that is not the concern of telcos. Their business is to provide data connectivity and charge for it. Content is not their domain and they can charge, if they wish, for any in house content they provide. Users will choose whether to download such content or not.

What Airtel or others of its ilk (there are others, for only on their concerted lobbying did TRAI issue the obnoxious and ill advised consultation paper that talked of allowing such devious methods of generating revenue) forgot was that the internet is the biggest equalizer. On it, a giant like Microsoft can offer its software at fancy prices while an independent software engineer can offer similar products free by working on open source platform. It is place where people all over the world collaborate to continuously update information and provide such services they think will be of use to people. It is a place where media giants like New York Times and Times of India share space with millions of web newspapers that provide opinion pieces that are read by millions. It is a place where people keep in touch through social networking sites. It is also a place where people have the ultimate choice Ã¢â¬" both in publishing and accessing the content they wish to. Playing favourites in such a scenario is dangerous and devious.

What Airtel is trying to do will destroy the internet as we know it. If telcos start playing favourites and make cartels of websites and app providers, one will soon find that one can check oneÃ¢â¬â ¢s bank account balance on the Vodafone network but not on Airtel. It will soon result in an internet by the rich, for the rich and of the rich. It will result in a censorship of the most subtle kind. It will result in the death of the internet. It needs to be prevented at any cost.