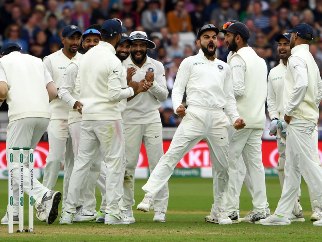 Editor-in-Chief of indiacommentary.com. Current Affairs analyst and political commentator. Writes for a number of publications. View all posts by this Author
Indias turnaround at Trent Bridge has been as amazing as was the abject surrender at Lords. No one expected India to cave in the way it did at Lords. Similarly, no one expected India to bounce back so strongly after being 2-0 down in the five-match series. It speaks volumes for the leadership and management qualities of the Kohli-Shashtri duo that they could get down and out players to pick themselves up, reverse the technical flaws in their game and exorcise the imaginary demons in their minds to up their game and beat England.

The turnaround was visible in all departments of the game. In batting, right from the top, all batsmen displayed the hitherto missing quality of patience to stay in the middle and play the balls according to merit. The shot selection by Indian players was more according to the pitch conditions and this resulted in them not throwing their wickets away. For the first time in the series, Dhawan and Rahul gave India a good start. It allowed Pujara, Kohli and Rahane the breathing space to consolidate and they did so with determination, not allowing England the upper hand.

The bowling department, although first class throughout the series, was even better in this Test. Ishant Sharma and Mohammed Shami troubled the batsmen with their probing line just outside the off stump, giving England a taste of their own medicine. Then, Hardik Pandya in the first innings and Jasprit Bumrah in the second produced dream spells to break the Englishmen. Pandyas performance was especially noteworthy as he is under fire from many quarters for not being a true all-rounder.

The Indian fielding was also top class with young wicket keeper Rishabh Pant and KL Rahul not letting anything go by them. Changes in the team also helped as replacing the off-colour and out of place Karthik with the young Pant gave India a better balance, with Pant being a left-hander. The Indians have made minor adjustments in technique and major ones in their mindset to improve their game. Two Tests still remain. If they can carry this form and determination ahead, they might yet pull an upset and historic series win.