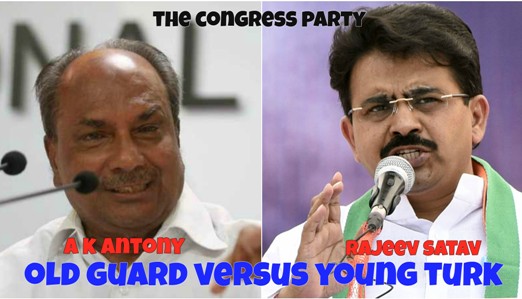 The conflict within the Congress party - the old guard versus the young Turks - came into sharp focus when interim president Sonia Gandhi held a video meeting with the Rajya Sabha MPs of the party yesterday. It also brought into focus the fact that despite much publicity about introspection and finding out the reasons for two successive crushing defeats at the hands of the BJP, the party has not carried out much internal discussion or debate. Sources have reported that much heat was generated during the meeting. It has not been reported whether Sonia Gandhi intervened or whose side did she take.

The nearly four-hour-long meeting was marked by sharp exchanges between senior leaders - the so-called old guard comprising mainly of A K Antony, P Chidambaram, Anand Sharma, Kapil Sibal and Manmohan Singh - and Rajeev Satav over when the introspection should start from. While the old guard was of the view that the party should examine why despite its aggressive stand (in a veiled reference to Rahul Gandhi's daily personal attacks on Prime Minister Modi which the old guard does not approve of and has advised Rahul to refrain from making), it is not making much headway in turning the people against the NDA. They were of the view that the party was not able to cash-in on popular disenchantment with the Modi government. P Chidambaram was of the view that the party lacked organization at the district and block level.

This brought Rajeev Satav, a know Rahul aide, to the centre stage. He lashed out at the old guard by saying that a deeper introspection was necessary from 2009 to find out how ministers under the UPA government shirked their responsibilities and how the regime was perceived to be corrupt. He also wanted to know why the regime got a bad name for being inactive and taking no big policy decisions between 2009 and 2014, leading to policy paralysis. He said that the party must introspect what went wrong during that period that the party was reduced to just 44 seats in 2014 elections. What he left unsaid was that the sins of that period, when the old guard was in total command, were to blame for the present woeful state of the party. The other young guards like P L Punia, Ripun Bora and Chhaya Verma reportedly chipped in to demand that Rahul Gandhi be made the party president once again, putting more pressure on the old guard.

Interestingly, Manmohan Singh who was the Prime Minister during the period about which Satav raised so many uncomfortable questions was totally silent throughout the heated exchange. He did not utter a single word in the entire four hours, but sources said that the gentle professor was very disturbed over the nature of the charges leveled against the UPA II government.