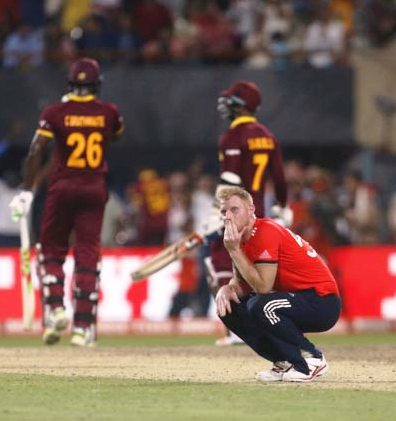 Editor-in-Chief of indiacommentary.com. Current Affairs analyst and political commentator. Writes for a number of publications. View all posts by this Author
A devastated Ben Stokes wondering what hit him in the last four deliveries of the match

The West Indies stunned England in the last over in a match that was evenly balanced till Carlos Brathwaite smashed four consecutive sixes off Ben Stokes, supposedly Englandâs specialist death overs bowler. The devastation that Stokes suffered â crouching on the ground with a dazed look, hiding his face behind his palms â perhaps told the story. England fought back valiantly after the West Indies had restricted them to 155. They had reduced the islanders to 17 for 3. But, as Darren Sammy has time and again said, Samuels, Bravo and then Brathwaite showed that someone or the other just stands up to be counted at crucial times in this West Indies team.

From a team that was unlikely to play in the tournament (a tiff over pay with their board had raised concerns that the WI might field a new team) to having been written off by most experts (TV analyst Mark Nicholas even said that they were a team with no brains), it has been an exciting and exhilarating journey for the players lead by an unflappable Darren Sammy. Of course it helped that most of the players have firsthand knowledge of Indian conditions as they are part of various teams in the IPL. The West Indies have now won three major tournaments â their colts won U-19 World Cup, the ladies won the World T20 and the men did the same. Are we going to see a revival of cricket in the Carribean? That can only happen if the West Indies cricket board has men of vision capable of translating these successes into inducing more youngsters to take up the game and enterprising enough to devise plans to raise decent revenues to pay the players what they deserve.

As for England, they can hold their heads high despite the loss. England did nothing wrong in the final. After having posted the highest total in a T20 World Cup final, England took quick wickets to reduce the West Indies to dire straits but failed to capitalize on it. Moeen Ali was strangely off colour in the final. Still, 19 from the final over was a tough proposition. If Brathwaite had not hit those sixes, they might have even won the cup. It took a special effort from Brathwaite to knock England out and Stokes will suffer nightmares over the onslaught.