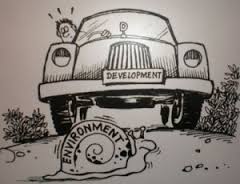 Address Environmental Concerns, But Development Must Go On

Address Environmental Concerns, But Development Must Go On

Editor-in-Chief of indiacommentary.com. Current Affairs analyst and political commentator. Writes for a number of publications. View all posts by this Author
image courtesy: delhigreens.com

The Supreme Court has, in two recent cases, categorically stated that it cannot stop development or play havoc with the economy in order to save animals or control pollution. While reiterating that saving tigers was important, the court said that it cannot be done at the cost of human beings. It also said that it will do its best to help reduce pollution, but that does not mean it will do so by passing orders that will create havoc in the economy.

The first observation was made in a case filed by some NGOâs, led by Conservation Action Forum, seeking to stop the widening of NH-7 between Nagpur and Jabalpur that passes through the Pench Tiger Reserve in Madhya Pradesh, on the grounds that the same would impede tiger migration routes. The Court said âtigers are important. But what happens to the movement of traffic? It is not the first time that a national highway is passing through a reserved forest. We are for protecting tigers. Tell us what are the mitigating factors that could be implemented by the project proponent so that tiger migration routes are not impeded.â

This is a very logical line of thinking by the SC. NGOâs nowadays seek total ban on development projects which is not a good thing. There are always ways where development can go on by accommodating ecological, animal protection or pollution controls. But these NGOâs do not employ their energies in seeking this. They always appeal to the courts or the NGT to stop the project. This is very restrictive activism that harms the country. In the instant case, animal friendly highways, with flyovers over the areas comprising animal movement corridors is the best solution. But the NGOâs did not pitch for that. Instead, they want to stop the widening of the highway.

But one thing the SC has to guard against and direct the government is the mushrooming of commercial establishments like shops, dhabas and resorts along the highway as it passes through the forest. It is seen that the forest area gives a huge business opportunity to unscrupulous people who set up commercial units, disregarding court established norms by bribing government officials. With time, these units create huge problem in animal movement, as is now being experienced in Kaziranga in Assam. There should be mechanism, or a special force, that monitors and stops, all kinds of construction activity â whether concrete structures or tin sheds â from coming up on either side of the highways as they pass through the forest or across known animal movement corridors.

The second observation was made in the case where application of BS VI norms was being discussed. Since BS VI seeks to make cleaner fuel available for vehicles, the government it would advance the deadline to 2020 from the earlier decided 2023. But advocate G. Shankaraanarayan wanted the court to direct two public sector units, Reliance and Essar, to sell their cleaner fuels in the domestic markets rather than export it, as they were doing now. The Court called it a fancy idea. It said that it cannot ask the government to take over private refineries. It also said that âit is one thing to direct the government to take steps to curb pollution and quite another to direct something that would play havoc with the economy.â

In the first case, the NGOâs also pleaded with the court to let NGT remain the right forum to deal with environmental clearance and other related issues. But the court refused, saying that if a matter was being heard by any High Court, the NGT cannot be allowed to hear it. One feels that the NGOâs are playing a game. In NGT, they find a one-dimensional forum where they can challenge and stop a project by highlighting only its harmful effects. They never suggest how the project can be altered, or what environment friendly things can be added, for it to go ahead. Instead, they seek a total ban. The NGT views the matter only from the environmental point of view and issues orders accordingly. This will, hopefully, not happen now as the Supreme Court has observed that development cannot be stopped on fancy pretexts.