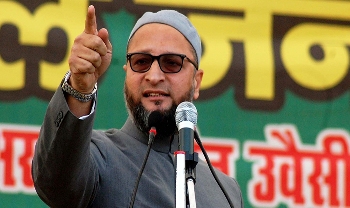 Editor-in-Chief of indiacommentary.com. Current Affairs analyst and political commentator. Writes for a number of publications. View all posts by this Author
Asaduddin Owaisi is displaying the same patriarchal mentality that self-styled guardians of the Muslim faith are used to. He said that the government is bent upon breaking Muslim families and throwing Muslim women on the streets by making triple talaq criminal and punishing the husband with a three year jail term if he gives the now illegal talaq. But this is applying convoluted logic.

Owaisi, and others of his ilk who have just the interests of Muslim males in mind, forget what was happening when triple talaq was being given over phone, whatsapp and skype. The husbands just used to utter or text the three dreaded words and vanished from the lives of their wives. The wives were abandoned, with no one to look after them and no legal remedy. The husband would often remarry and lead a good life while the wife suffered. By protesting against the three year jail term, Owaisi and others want to ensure that the system continues in secrecy.

They are also forgetting that the triple talaq bill empowers women to complain against their errant husbands who give them instant talaq, which is against the Quran and now illegal too. The courts will not, in fact cannot, take sou moto cognizance in case of an instant talaq. The wife will have to register a complaint under the relevant section of the law. The wife do so only when she is given an instant talaq and abandoned by the husband. So this talk of the triple talaq bill throwing Muslim women on the streets is just balderdash. The wife is abandoned in any case and the bill will just provide them with a legal remedy. The misinformation is being spread by those who do not want empowerment of Muslim women and want the male hegemony to continue.

The most laughable argument being put forward is that since triple talaq is already illegal, why punish someone for something that has no legal sanction. But isnt it a fact that punishment can only be prescribed for illegal acts? If cheating is a crime under section 420 of the IPC, should there be no punishment for cheats as the crime has no legal sanction? If something is illegal, it does not mean people will not do it. The punishment is prescribed for those who break the law and Muslim men must be prepared to face the consequences of abandoning their wives through illegal instant talaq.