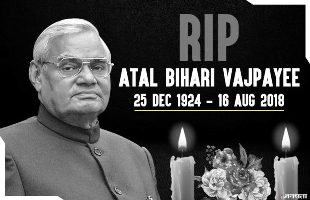 Atal Bihari: Leaders Like Him Are Not Made Any More

Atal Bihari: Leaders Like Him Are Not Made Any More

Editor-in-Chief of indiacommentary.com. Current Affairs analyst and political commentator. View all posts by this Author
With Atal Bihari Vajpayees passing away, India has lost a great statesman. Although he wore many hats, his main quality was in taking everyone along and never consciously speaking something that could create ill-will. One can understand his mind by going through the poems he wrote or the great speeches he gave, but sometimes there is a huge difference between what a person thinks and what he does. With Vajpayee, that was not the case. The man was as simple and uncomplicated as his poetry.

Although he ordered the nuclear weapons test, Vajpayee also strongly ensured that India used its nuclear capability for peaceful purposes. He carried forward the reforms initiated by PV Narashima Rao despite pressure from the Swadeshi lobby and the RSS, an organization he started out with. We hear so much about sabka saath sabka vikas nowadays, but it was Vajpayee who demonstrated how it could be achieved despite belonging to a Right-wing party.

Although Vajpayee seemed to be a soft man, he could use strong persuasion to get things done. But his method was not to employ arm-twisting or threats. He used consensus as a weapon to win over opponents. He was Indias best advertisement for parliamentary democracy and how it should be run. The measure of his greatness can be gauged from the fact that despite differences, none of his political opponents could launch serious attacks on him. His personal integrity was spotless.

From preaching Rajdharma to Narendra Modi and talking about Insaniyat, Kashmiriyat and Jamhuriyat to assuage sour feelings in a burning J&K, the man always struck the right chords. As prime minister, he led the country strongly without making tall claims or indulging in self-advertisement. Every Indian could point at Atal Bihari Vajpayee and say with pride that he is the Prime Minister of our country and that was his biggest achievement.