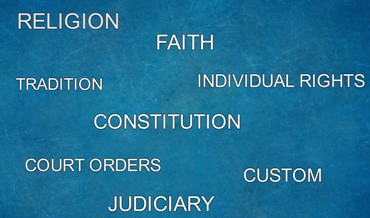 Ayodhya: Supreme Court Was Neither Strict Nor Patronizing, It Went By Law

Ayodhya: Supreme Court Was Neither Strict Nor Patronizing, It Went By Law

There are several things that come out in the Supreme Court judgment in the Ayodhya land dispute case. The first is the fact that the court went by the Archaeological Society of Indiaâs (ASI) finding that the mosque was not built on vacant land. Once this was accepted, it went without saying that some structure had been razed to build the mosque. Although the ASI did not expressly say that a Hindu temple was razed, the very fact that its excavations below the mosque found structures with distinctly Hindu motifs provided circumstantial evidence of the same.

Second, the court was categorical in stating that that the Muslim petitioners had failed to prove âexclusive possessionâ prior to 1857. Accounts of many English travelers from that period point to the fact that both Hindus and Muslims used to pray at that site. While both prayed without hindrance in the inner dome, the Hindus started praying outside when a fence was erected by the British in 1858, ostensibly to prevent disputes. The Supreme Court was of the opinion that Muslim claims to the land fell flat in the face on not proving that they were in exclusive possession of the property before 1857 and only they had access to perform namaz at the masjid.

These two were clinching arguments for the court. But the court also said that the act of damaging, desecrating and demolishing the Babri Masjid was illegal and the perpetrators must be punished. It declared that the acts of desecrating the masjid by placing idols inside the inner dome on the night of December 22, 1949, and the demolition by a group of so-called kar sevaks on December 6, 1992 were blatantly illegal. It said both these acts guided it to balance its judgment by providing a parcel of land at an alternative site for the Muslims to build a mosque. While some Muslims have termed it khairat or charity, it is permissible for the Supreme Court to use Article 142 of the Constitution to deliver complete justice in a case. Since a Muslim structure was demolished, even if they could not prove ownership of the land, complete justice demanded that a site is provided to them to reconstruct the mosque. The Supreme Court has done just that and there is no charity involved in this. The Sunni Wakf Board has indicated that it will decide whether to accept the land very soon.

No judgment, however balanced, can please anyone. But if the evidence presented and arguments made convinced the judges that the disputed land belonged to the Hindus, there was no way they could have divided it like the Allahabad High Court just to please others. That would not have been justice. That would have been a way to say that since we do not know how to settle this vexed question, we will please all. The court has gone by the material on record. The only additional thing it has done is to award a 5-acre piece of land to the Muslims in order to set right the wrongs perpetrated in the desecration and demolition of the Babri Masjid. The Supreme Court has neither been strict nor patronizing. It has done what needed to be done as per law and used its discretion where permitted. Instead of cribbing and nitpicking, as some are doing, people should see this as a balanced judgment and move ahead. Religion has captured the political agenda of the country for long. Now let us replace it with talks of education, health, building infrastructure and economic growth.