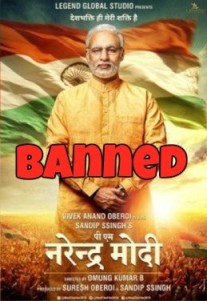 Ban On Modi Biopic: Miscalculation By Both The BJP And The Producers

Ban On Modi Biopic: Miscalculation By Both The BJP And The Producers

Editor-in-Chief of indiacommentary.com. Current Affairs analyst and political commentator. Writes for a number of publications. View all posts by this Author
After three courts, including the countrys apex court, refused to interfere with the release of the Narendra Modi biopic PM Narendra Modi, the Election Commission (repeatedly called a stooge of the ruling party at the Centre by the opposition parties) has finally banned the release of the film, both in cinema theatres and on digital media, till the model code of conduct (MCC) is in force. It has also decreed that the airing of NaMo television channel be similarly stopped till that time.

This comes as a huge blow to both the producers and the BJP. The former were hoping to cash in on the popularity of the Prime Minister to make money during the election time while the party was hoping that the story on celluloid would win new converts and increase its vote share. The producers can at least hope that Modi comes back to power and his popularity increases in which case they can still hope to get excellent returns on their investment. But for the party, the release of the film after the elections will only have academic value apart from adding to the persona of its charismatic leader.

Both the producers and the party must share the blame for bringing things to such a pass. It was obvious that there would be objections from the opposition against any film that eulogizes Modi, that too during election time. It was also obvious that the elections were to be held anytime in April and May. Business sense warranted that the producers should have released the film sometime in January to escape punitive action from the EC. In three months, the film would have spread the message of Modi all across the world and achieved its goal. That they didnt release it then proves that they did not have good legal advisors.

The BJP should also have anticipated that the opposition would create an issue and the film would not pass muster under the MCC. It would be childish to assume that the party or the Prime Minister was not involved in the making of the film. Any biopic on a living person cannot be made without the express consent of the subject. The party knew that there would be huge and free publicity for Modi and the party through the film. Hence, it should have urged the producers to release it much before the MCC came into force. That it didnt do so proves that either it was wrongly advised that the film would not violate the MCC or was overconfident that the EC or the courts would not interfere.