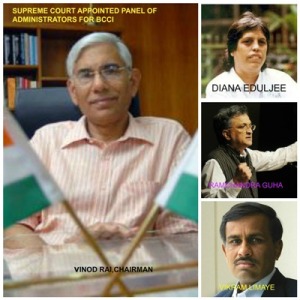 By our team of in-house writers. View all posts by this Author
Finally, the Supreme Court has appointed a panel of four administrators for the beleaguered Board of Control for Cricket in India. The panel is to be headed by Vinod Rai, former CAG. The other members are Diana Eduljee, former captain of Indian womens cricket team, Ramchandra Guha, eminent cricket historian and Vikram Limaye, CEO & MD of IDFC. Apart from the fact that the court did not think fit to include a young, recently retired male cricketer like, say, Rahul Dravid or a clean sports administrator, there can be no quarrel with the appointments. It is extremely and particularly heartening to see a woman cricketer get a seat on the panel to oversee the governance of the body that has always treated them in a step-motherly fashion. In 2013, she had slammed the BCCI saying that its discriminatory attitude towards the womens game was killing it. Eduljees appointment is likely to add a fresh perspective to how the game is governed in India.

Since the affairs of the BCCI, both financial and administrative, have always been shrouded in secrecy, the appointment of former Comptroller & Auditor General Vinod Rai to head the panel is laudable. Rai has a no-nonsense attitude and a history of getting things done. His stand against corruption has been widely acknowledged and praised worldwide. He had nailed the government in 2G spectrum, coal block allotment and the Commonwealth Games, among other controversial dealings. Due to his long administrative experience, he knows how huge organizations like the BCCI work and where the loopholes exist. He is expected to plug them and induce accountability in the body.

Ramchandra Guha has written extensively on the game. He has recorded its history in his own inimitable way. Guha has never hidden his dislike for the way the game was administered in the country. Now is the time for him to make history by getting better policies implemented in running the game. He can now be part of history and write about it too. Vikram Limaye, on the other hand, brings business acumen and an ability to negotiate complex deals  this has become an integral feature of sports management with the advent of mutli-billion dollar TV rights deals spanning several continents  in a highly competitive environment. He holds an MBA degree from the prestigious Wharton School and has served on the boards of various companies. If sport has become big business now, the BCCI needs a person like Limaye on the panel.

The only reservation one has is that apart from Eduljee, all others on the panel have wide ranging and important other commitments. At the present state of affairs, BCCI will need people who can devote considerable, if not full, time to manage them. One is not sure how much time Rai, Guha and Limaye would be able to spare from their busy schedules. If they can devote the time needed, one is sure that the administration of the game will be in good hands and all Lodha committee recommendations will be implemented, sooner rather than later.