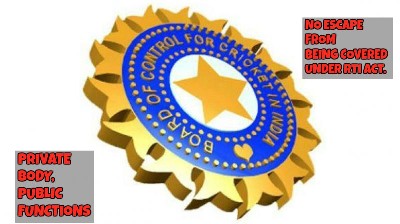 BCCI Must Be Brought Under RTI Act

BCCI Must Be Brought Under RTI Act

Editor-in-Chief of indiacommentary.com. Current Affairs analyst and political commentator. Writes for a number of publications. View all posts by this Author
The Law Commission has recommended to the government that the Board of Control for Cricket in India (BCCI) be brought under the RTI Act. This is very sensible advice as for long, the BCCI has been run as a private club although it runs the most popular game in India and although it is a not-for-profit entity, it collects and uses huge funds from ticket sales to the public or through selling media rights of cricket matches. There is no transparency in its operations and a few privileged individuals make all the decisions. Votes of regional associations are bought by spreading  or withholding  largesse. Stakeholders and the general public have the right to know how the body is run and to demand information about specific things that trouble their mind.

Ideally, if all things are above board in BCCI, it should not object to being brought under the RTI Act. But the body has always insisted that it is a privately run society under the TN Societies Registration Act and hence is exempt from outside interference. It has stressed that it does not receive government grants or funds and is not a sports federation in that sense. It surpassed itself when it contended that the team that plays international matches for India is actually Team BCCI and not Team India. This was a huge slap in the face of millions of fans who accord demigod status to cricketers by thinking that they are playing for the country.

But these arguments of the BCCI do not hold water in face of what the Supreme Court said in its order in BCCI vs Cricket Association of Bihar & ors. The court had said that The majority view thus favours the view that BCCI is amenable to the writ jurisdiction of the High Court under Article 226 even when it is not State within the meaning of Article 12. The rationale underlying that view if we may say with utmost respect lies in the nature of duties and functions which the BCCI performs. It is common ground that the respondent-Board has a complete sway over the game of cricket in this country. It regulates and controls the game to the exclusion of all others. It formulates rules, regulations, norms and standards covering all aspect of the game. It enjoys the power of choosing the members of the national team and the umpires. It exercises the power of disqualifying players which may at times put an end to the sporting career of a person. It spends crores of rupees on building and maintaining infrastructure like stadia, running of cricket academies and Supporting State Associations. It frames pension schemes and incurs expenditure on coaches, trainers etc. It sells broadcast and telecast rights and collects admission fee to venues where the matches are played. All these activities are undertaken with the tacit concurrence of the State Government and the Government of India who are not only fully aware but supportive of the activities of the Board. The State has not chosen to bring any law or taken any other step that would either deprive or dilute the Boards monopoly in the field of cricket. On the contrary, the Government of India have allowed the Board to select the national team which is then recognized by all concerned and applauded by the entire nation including at times by the highest of the dignitaries when they win tournaments and bring laurels home. Those distinguishing themselves in the international arena are conferred highest civilian awards like the Bharat Ratna, Padma Vibhushan, Padma Bhushan and Padma Shri apart from sporting awards instituted by the Government. Such is the passion for this game in this country that cricketers are seen as icons by youngsters, middle aged and the old alike. Any organization or entity that has such pervasive control over the game and its affairs and such powers as can make dreams end up in smoke or come true cannot be said to be undertaking any private activity. The functions of the Board are clearly public functions, which, till such time the State intervenes to take over the same, remain in the nature of public functions, no matter discharged by a society registered under the Registration of Societies Act. Suffice it to say that if the Government not only allows an autonomous/private body to discharge functions which it could in law takeover or regulate but even lends its assistance to such a nongovernment body to undertake such functions which by their very nature are public functions, it cannot be said that the functions are not public functions or that the entity discharging the same is not answerable on the standards generally applicable to judicial review of State action.

The Law Commission has also pointed out that prior to the cancellation of its registration as a charitable trust under the IT Act in 2007, the BCCI had received tax exemptions of more than Rs 2100cr. Otherwise too, the body receives land to build stadiums at concessional rates and till recently, the administration, including the police forces of cities where matches were held, used to provide all assistance and security to the body without taking any remuneration. Was not public money used for the benefit of BCCI?

The BCCI should definitely be brought under the RTI Act. It has monopolistic control over a game that is Indias national pastime if not its national game. The public has the right to know about things that happen behind the scenes. It has the right to know how the body is being run. For example, a person in Manipur has the right to know what the BCCI is doing to develop cricket in the state after ignoring it for so many years. The cloak and dagger system must go and transparency must come in. BCCI mandarins must be made answerable to the public.