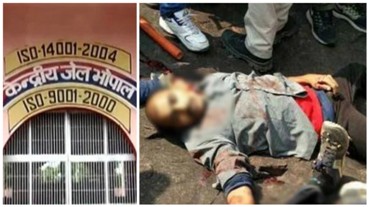 Editor-in-Chief of indiacommentary.com. Current Affairs analyst and political commentator. Writes for a number of publications. View all posts by this Author
A jailbreak is a serious thing. It points to lapses on part of the jail administration. When it is like the Bhopal jailbreak and involves as many as 8 prisoners who are alleged terrorists belonging to the banned organization SIMI, the matter becomes graver. Once it is clear that such prisoners have escaped, the first response of the administration should be to recapture them at any cost. Any self-respecting authority would be concerned to find out how it happened under its watch and would like to plug loopholes to prevent similar incidents in future.

Further, while looking for or chasing the escapees, the police should take various factors into consideration, the chief among them being whether they are armed. Any police action is to be guided by the fact whether and how the escapees can retaliate. The Bhopal jailbreak escapees were unarmed by all accounts. Hence, the direction from the top should have been to recapture them unharmed. That would have clearly established how they managed to escape.

But that precisely must have been the reason why they were killed in a hurry. It seems that the chase and the subsequent encounter in which all of them were killed were designed to liquidate them, lest unsavoury facts came to light and heads rolled in the jail and police administration. There was no attempt to capture them. Unarmed escapees were fired at as if they were threatening the police. None of them was shot in the legs to prevent them from escaping. Some of them were also allegedly shot in the back. The shooting was to kill them, which is against police manual and also human rights.

If the police cannot capture 8 jail escapees and has to kill them, it points to something fishy. Although a probe has been ordered, one is sure nothing will come out of it. The larger conspiracy of who helped them and the modus operandi of the escape has been buried with their death. It also gives rise to a question whether the escapees were lured into fleeing by a section of the police force in order to kill them in a subsequent encounter. It wouldnt be surprising if that was in fact the case, as it has happened in the past. Such gross violation of human rights  with the police playing judge, jury and executioner  cannot be tolerated. Bhopal jailbreak should be a probed by an ex judge of the Supreme Court to clear matters and the culprits, if any, must be handed out exemplary punishment.