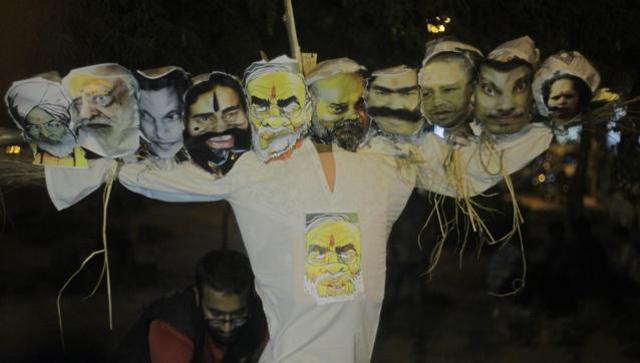 Editor-in-Chief of indiacommentary.com. Current Affairs analyst and political commentator. Writes for a number of publications. View all posts by this Author
pic courtesy: hindustan times

Students burn effigies of Modi, Shah at JNU
There are reports that students belonging to NSUI (the students wing of the Congress party) burnt a ten-headed effigy whose faces included those of Prime Minister Narendra Modi and BJP chief Amit Shah at the JNU campus popular Saraswati Dhaba on Dussehra. The home minister has asked for a report on the issue.

Criticism of government is not anti-national
At the outset, it needs to be noted that there is a huge difference between being anti-national and being anti-government. Anti-nationalism cannot be tolerated at all, whether on campus or outside. But in a democracy everyone, including students, have the right to criticize the government using all means at their disposal  and that includes burning effigies, as long as the protests do not lead to widespread anarchy and lawlessness. The government has to take such incidents in its stride.

Campus rules must be adhered to
Having said this, there remains the issue of campus discipline that needs to be investigated. If permission was required to stage the protest, was it obtained? Was it clearly mentioned in the request for permission that effigies would be burnt (whose, it does not matter)? But that again is the internal matter of the university and the government need not interfere.

Opinions must not be supressed
Students have their own opinion of issues and often these opinions will differ from those of the government. If student opinions are not blatantly anti-national (and in recognizing this, the government will have to shed the attitude that what it thinks is pro-national and what others think anti) they should be given space to express themselves. A democracy exists and grows only when there is difference of opinion leading to healthy debate that widens intellectual horizons. Any suppression of opinion only leads to mediocrity and constricted thinking that stifles growth.

University should decide if rules were broken
The government should let the university decide if rules were broken and if so, what punishment should be meted out to erring students. After all, if political parties can resort to burning effigies at the drop of a hat, the students also have the right to do so, provided they do not break any campus rules.