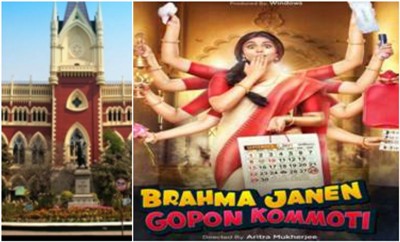 Brahma Janen Gopon Kommoti is a Bengali film that was released recently to good reviews. However, the film has been in the news because one Subhadip Adhikari filed a petition in the Calcutta High Court asking for a ban on the release of the film as he said that it hurt his sentiments as a Hindu. The argument put forward by the petitioner was that by using the name of Brahma, considered the creator of the universe and revered accordingly in the Hindu pantheon, with "gopon kommoti" which means a secret act, the filmmakers were alluding to something dirty in the name of God. That, he said, hurt his religious sentiments and hence the release of the film should be banned, he pleaded.

The court was categorical in saying that "gag orders of the sort as prayed for would be a complete antithesis of the liberal principles of a democracy and a democratic religion like Hinduism." The court also said that "although there is freedom to practice, preach and profess any religion guaranteed under the Constitution, the right to free speech and expression is also enshrined in the Constitution itself. As such, there has to be a balance between the said fundamental rights." The court also described Hinduism as "a way of life" and said that "if the Hindu religion was so fragile and wounded so easily, it would not have survived over the ages through various onslaughts, as borne out by history."

It is sad that a single person is entitled under the current provisions of law to initiate a lawsuit against a work of literary, artistic or cinematic expression and harass the artist or artists and waste the time of the court. Of course, the petitioner was within his rights to move the court but one feels that there should be detailed guidelines for filing such petitions and screening should be done at the filing level to weed out frivolous petitions. The Supreme Court and the high courts in India are already saddled with an immense backlog of cases. If people are allowed to waste the time of the courts with such frivolous petitions, the backlog will never be cleared. The Supreme Court has already prescribed guidelines on the admission of PILs and has spoken many times against frivolous PILs. One feels the same should be done for such petitions.