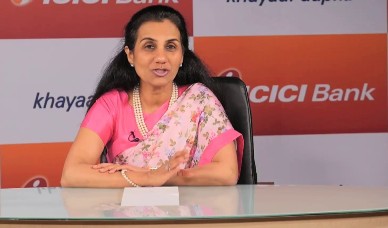 Editor-in-Chief of indiacommentary.com. Current Affairs analyst and political commentator. Writes for a number of publications. View all posts by this Author
Political interference and corruption have been the undoing of PSU banks. Nepotism might well do the same to private banks in India. The web of deceit surrounding the dealings between Deepak Kochhar, husband of ICICI Bank CEO and MD Chanda Kochhar and Venugopal Dhoot, chairman of Videocon Industries would put any writer of financial thrillers to shame. That Videocon took a loan of Rs 3250cr from ICICI Bank; that Chanda Kochhar sat on the committee that vetted and passed the loan and that the loan later became sticky and has not been paid back in full is known to all. But the way backs were scratched for the deal to materialize is not.

The story in short is this: In 2008, Deepak Kochhar and Venugopal Dhoot jointly promoted a company called NuPower Renewables. In 2010, another company owned by Dhoot gave a loan of Rs 64cr to NuPower. In 2012, ICICI Bank (as part of a consortium) lent Rs 3250cr to Videocon Industries. Shortly thereafter, a trust controlled by Kochhar bought controlling shares of the company that lent Rs 64cr to NuPower for just Rs 9 lakh. Later, Dhoot sold his 50% stake in NuPower to Kochhar for just Rs 2.5 lakh. Between all this, NuPower received Rs 325cr as offshore investment from First Land Holding, an entity based in Mauritius.

The CBI has registered a preliminary enquiry to find out the nexus between Dhoot and Kochhar. The IT Department has sought details of First Land holding from the Kochhars. Now, the Serious Fraud Investigation Office (SFIO) has sought the permission of Ministry of Corporate Affairs to probe the ICICI Banks loan to Videocon.

Yet, the chairman of ICICI Bank, MK Sharma, continues to defend Chanda Kochhar and says that an independent enquiry is not necessary. His main defense was that since Videocon was not an investor in NuPower, there was no need for Chanda Kochhar to recuse herself from the sanctioning committee. He also said that since a consortium was involved that had agreed on terms and conditions and since Kochhar had made all necessary disclosures and was not chairing the committee, she has committed no wrong. But that was one week ago. One is sure that after the latest and murkier disclosures and investigations by multiple agencies, even Sharma would be forced to revise his opinion.

Another interesting fact that has come to light is that many of ICICI Banks loan clients took restructuring advice from Avista Advisory Group, run by Rajiv Kochhar, Deepaks brother and Chanda Kochhars brother-in-law. While brothers-in-law do not come under the ambit of relatives under the Companies Act and hence no disclosures need to be made, given the ways quid pro quo works in India, this is another angle the investigating agencies would do well to probe deeply.

ICICI Bank is Indias largest private bank and to restore public faith (its shares have tumbled on the bourses), it must have a forensic audit conducted by an independent agency, regardless of the status of the investigations being conducted by government agencies. It must punish the guilty. The future of privately-owned banks depends on the steps ICICI Bank takes to address this issue. Already there are rumblings in Axis Bank about MD & CEO Shikha Sharma after the RBI asked the bank to reconsider its grant of the 4th three year term to her because of banks below-average performance and deteriorating asset quality. Hence, as the top private bank, ICICI Bank must take the lead to restore good governance.