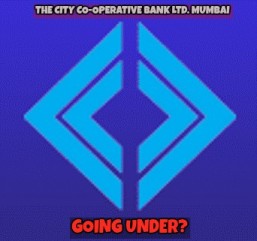 Editor-in-Chief of indiacommentary.com. Current Affairs analyst and political commentator. Writes for a number of publications. View all posts by this Author
The Reserve Bank of India has directed the City Cooperative Bank in Mumbai to cease and desist from accepting any deposits or making any loans without prior approval from it. It has also said that depositors can be allowed to withdraw just Rs 1000 per deposit account till further directions. The bank has been placed under direction for its poor performance. The RBI said that it will review matters periodically and change directives as per situation. It also said that this does not mean that the banks licence has been cancelled but only that it can do banking with restrictions till its position improves.

What the RBI has done is as per the banking laws of the country, but a question that begs an answer is why are small (or even big) depositors made to suffer for the follies of the management? The only answer one can come up with is that it is to prevent a run on the bank (in which case it will go under anyway) once the news of it being placed under RBI directions becomes public. But whatever be the reason, what will a depositor who has put all his savings in the bank do if he needs the money urgently, say for his daughters admission in an institute of higher studies or for her marriage? What will a business that has its only current account with large funds in the bank do? Shall that business also go under despite having the funds as the banks management has not performed well and the RBI will not allow the bank to make payments over Rs 1000 per account?

The banks website has not been updated after posting the accounts of financial year-ending March 2016. In that period, the bank could not be said to be troubled. All key indicators were good. Its stated NPA percentage was just 8.84, much lower than many of the PSU or private banks. Its Credit to Risk Weighted Assets Ratio (CRAR) was 10.16% (9% is the standard ratio prescribed by the RBI), which was moderately adequate as per Basel II norms. But the very fact that accounts for 2017 or for any quarters of 2018 have not been put up on the website means that whatever deviation that took place happened in the last two years  maybe even in the year-ended March 2017. So why did it take the RBI so long to take action?

Although banks need to be handled with extreme caution, there has to be a balance between the needs of the depositors and the adherence to banking norms. There is no doubt that a run on any bank can be highly detrimental for the financial ecosystem, especially in these times when a lot of misinformation is being spread about the FRDI Bill. But it is also true that placing restrictions like limiting withdrawals to just Rs 1000 per account also crushes the common mans faith in the banking system, especially after he sees Vijay Mallya and Nirav Modi fleeing the country after massive scams while he or she cannot withdraw even his own money. What the RBI has done is prudent regulation, but its social ramifications may be very damaging. Another way has to be found to provide relief to customers of small non-PSU or cooperative banks that are not performing well.