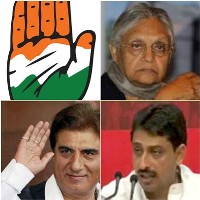 Congress Discloses its Cards For UP

Congress Discloses its Cards For UP

Editor-in-Chief of indiacommentary.com. Current Affairs analyst and political commentator. Writes for a number of publications. View all posts by this Author
All talk of Priyanka Gandhi being the face of the Congress party in UP have been laid to rest with the party announcing the 78-year old warhorse Shiela Dikshit as its candidate. With this, it is clear that Prashant Kishore has got one of his recommendations accepted and another one rejected. He has got a Brahmin face, but not of the age group he would have liked. Dikshit is way too old and Kishore is reported to have changed his strategy to give her slogans related to her age. It is another matter how the electorate will connect to her, given the fact that on the other side is Akhilesh Yadav, who at 44 in 2017 will be 30 years younger and closer to the age of nearly 50 percent of the electorate. The BJP is also likely to pull out a young candidate.

The Congress is facing the worst of times and does not want to expose its heirs apparent to the risks involved in UP. With four cornered fights in most of the constituencies, the party is likely to end up last in a majority of them. Hence, it pays to keep Rahul and Priyanka away from the direct firing line. Since it does not have a second rung leader in UP, it has chosen to fall back on the family loyalist Dikshit. It has also appointed the ex-Samajvadi Party man Raj Babbar as state chief and given him a deputy in Imran (Boti-boti) Masood, completing the Brahmin-OBC-Muslim axis. Raj Babbar was chosen as he is non-controversial but he is largely an outsider and the cadre is not going to be enthused by his appointment. It reinforces the Congress high commands habit of imposing office bearers from Delhi. As for Masood, he once threatened to chop PM Modi into pieces and it shows how desperate the Congress is to win Muslim votes. But this strategy is unlikely to bring in the results and might even end up benefiting the BJP. Now all depends on whom the BJP chooses to be its CM candidate in the state.