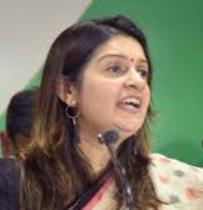 Editor-in-Chief of indiacommentary.com. Current Affairs analyst and political commentator. Writes for a number of publications. View all posts by this Author
Congress spokesperson Priyanka Chaturvedi has resigned from the party. She was left with no other option when the party reinstated several leaders of its Mathura unit within days of having suspended them for misbehaving with Chaturvedi. It needs recalling that Priyanka Chaturvedi lodged a complaint with the party leadership after she was threatened by several local leaders in Mathura. Showing great alacrity, the party had suspended them after her complaint. But within days, they were reinstated, ostensibly on the directions of Jyotiraditya Scindia, the partys minder for Uttar Pradesh. When it was reported that they had been reinstated, a shocked Chaturvedi lashed out at the leadership saying that it had given preference to lumpen goons instead of those who had given their sweat and blood for the party.

Chaturvedis case brings into focus the way money and muscle power has taken over Indian politics. The lumpen goons she talks about have made themselves so indispensable that no party can ignore them or take action against them. The party has treated Chaturvedi as a dispensible pretty face and thinks that her replacement can be easily found. After all, what is a spokesperson compared to bahubalis who can fill the party coffers through extortion money and arrange crowds at party meeting through their hired toughs? In his interaction with college students a few weeks ago, Rahul Gandhi had said that women will get special treatment if Congress came to power. But the way Chaturvedi has been treated, it seems it was just an election jumla, a word the Congress is so fond of sticking to the Modi-Shah duo.

Chaturvedi waited a day after making her lumpen goons tweet. When no one from the party approached her to explain things or assuage her feelings, there was no option left to her but to resign from the party. She has made the action irreversible by changing even her twitter profile by removing all mention of her being the spokesperson of the Congress (It has just been reported that she is joining the Shiv Sena today). The Congress has acted in haste. Even if it could not do without the services of the Mathura leaders, it could have at least taken Chaturvedi in confidence and asked the said leaders to apologize to her before reinstating them. The way it was done, it seems the Congress wanted Chaturvedi to resign. Most self-respecting persons would have.