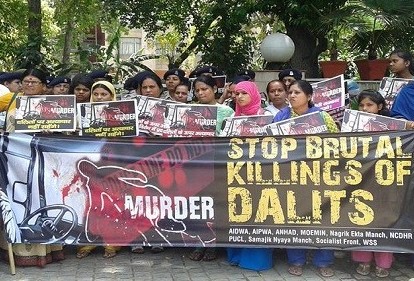 Editor-in-Chief of indiacommentary.com. Current Affairs analyst and political commentator. Writes for a number of publications. View all posts by this Author
The Dalits are doing to the BJP what the opposition parties could not in the last four years despite many attempts. Two Bharat Bandhs in one month are ample proof of that. The first bandh was in their support and the second was to protest against reservations for them. But the Dalits are in focus. The opposition could not even manage one despite being so agitated over demonetization and other issues. Although initially the Dalit protests were politically motivated, they have now assumed the character of a popular uprising cutting across region and party affiliations, although largely confined to northern India.

Why are the Dalits up in arms against the government despite Modis claim that his government has shown more respect to Ambedkar than any other before it? The simple fact is that many Dalits supported the BJP in 2014 as they thought Modi meant what he said by sabka saath sabka vikas. They have never given much thought to Hindutva politics for the simple reason that they are not treated as Hindus by the Hindu society dominated by upper castes. Hence, they supported Modi only to fulfill their aspirations.

Four years down the line they see that Modis growth agenda has been hijacked by assorted groups who are bent on showing the Dalits their place. Hence, there are no jobs for them. They have been picked up and thrashed for allegedly dealing in cow hides. Brilliant students from their fold have been pushed to suicide. They have been prevented from celebrating their festivals. They have been prevented from growing moustaches or riding horses. In short, they are being told that they have to remain under the shoes of the upper castes. The worst thing is that apart from token words, Narendra Modi has done little to assuage their feelings or punish those who have made Dalit-bashing their profession.

Let alone their aspirations being fulfilled, they are being told that it is a crime for them to have any aspirations beyond what the upper castes have decreed for them. Their stereotype must not change and if they dare try to change it, they will be thrashed. The Dalits have decided that they will not take this lying down.

Now Modi and Shah are asking Yogi Adityanath what went wrong. But Adityanath is a recent entrant. The first signal of things going wrong should have hit Modi-Shahs brain when Rohit Vemula was pushed to commit suicide. The ABVP goons must have been reined in then. They were not. Then, when witch-hunting started over beef eating and skinning and handling of cow hides, Dalits were targeted as much as Muslims. It was required that prompt and decisive action was taken to end that. It was not taken. So answers need to be provided by Modi-Shah and not Adityanath.

The plain fact is that the Dalits have been alienated. It will be impossible to win them back for the BJP, more so as the parties representing their cause have started uniting. It is easier for SP, BSP and others like them to paint the BJP in hideous colours than it is for the BJP to show itself as saint and savior. The Dalits trusted it in 2014. In four years, the BJP allowed fringe groups affiliated to it to destroy that trust. The Dalits are very angry and it is showing.