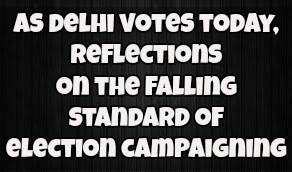 Delhi Elections: How Will The People Vote After The Vitriolic Campaign?

Delhi Elections: How Will The People Vote After The Vitriolic Campaign?

The people of Delhi will finally be relieved as they line up to vote today. For the past couple of months, they have witnessed an election campaign that was about everything else but the development of their beloved city. Although the BJP has, in recent times, tried to conduct all state election campaigns on national rather than local issues, the Delhi campaign stood out because of the extra vitriol in the hate speeches (desh ke gaddaron ko, goli maro saalon ko) and other efforts to polarize the electorate. The BJP was handed a ready issue by the Shaheen Bagh (SB) protestors. It remains to be seen how many people were swayed enough by its vitriol to vote for it.

Kejriwal's ambivalence towards the SB protestors and his last-minute visit to the Hanuman Temple might be seen as a panic reaction to the BJP overdrive. In the week leading to the polls, there were reports of an undercurrent of support for the BJP (although earlier opinion polls had all said that though the BJP would increase its vote share, AAP would still form the government). But should Kejriwal worry, given his people-friendly initiatives that are being appreciated by many? Yes. Indian politics is getting dirtier by the day (and in this context, one thinks that Amitabh Bachchan, who had called it a "cesspool" in the Eighties, will not find an appropriate word to describe it now). One's governance record, which should normally be the barometer of one's capabilities, is often pushed aside by 'other' factors. Hence, in the end, more people might be swayed by the allegations that the AAP has paid people to protest at SB or is supplying them biryani than they will be by the mohalla clinics or free commute for women in government buses or free electricity his government is providing.

Whatever be the final decision of the people of Delhi, one thing is clear: there is an urgent need to change the tone and tenor of election campaigning in India. What country would tolerate people at election rallies yelling for the blood of a section of their own countrymen? Who gives them the right to brand any and everyone a gaddar? Things, if one might say, have already gone out of hand. If there is any further decline in the standard of campaigning, elections might be won but the country, as we know it and want it to be, will be lost forever.