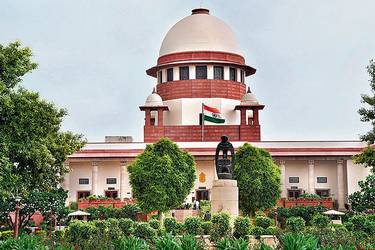 Did The Supreme Court Fail In Its Duty In Its Order On Curbs On J&K?

Did The Supreme Court Fail In Its Duty In Its Order On Curbs On J&K?

Has the Supreme Court order on the pleas against restrictions imposed in J&K failed the nation? For, despite pointing out several things as laid down in the law and then laying down norms for the exercise of executive power, it has not sought to quash the orders and lift the restrictions. The entire order reads like a manual of law and an advisory. But is not the Supreme Court a court of justice? Was it not expected to set right what it found wrong in the executive orders?

The apex court had asked the government to provide it with all the orders issued by the state administration from August 4, 2019.  The government provided some of them and expressed its inability to provide the rest. In its present order, the apex court has said that any executive order must give detailed reasons for imposing the restrictions so that aggrieved persons can challenge it. Since the government could not provide the orders and hence the reasons for imposing the restrictions, was it not the duty of the court to quash the orders and provide relief to the petitioners?

Then, it declared that the use of the internet for free speech and trade and commerce was a fundamental right under Article 19(1)(a) and 19(1)(g). It also said that an indefinite suspension of internet services was not permitted by law. The internet is suspended in most areas of J&K for the last five months, which, in the absence of any government order stating the time period for the suspension, must count as being for an indefinite period. Yet it failed to give orders for the restoration of the service. Instead, it just asked the administration to review the situation within a week.

It further said that imposing restrictions, including under Sec. 144 of the CrPC, "cannot be used as a tool to prevent the legitimate expression of opinion or grievance or exercise of any democratic rights". This observation might come in handy for the citizens to fight the government in the future, but it failed to provide relief to the people in J&K as the court did not quash the orders imposing restrictions under sec. 144 that the government has kept in place in several areas for more than five months now. The government can keep the restrictions in place indefinitely by issuing a fresh order after six months (for that is the maximum time it can keep the restrictions under sec. 144 against one order).

The court might well say that the government's action was due to "public emergency" and "in the interests of the nation" and hence it has not quashed the same. But if it thought so, it would have done well to define these terms in detail as these terms which are set as conditions for imposing restrictions have not been defined in detail anywhere in any law in India. Hence, they have always been misused by ruling dispensations. In these times when the "interest of the nation" is increasingly being subsumed with the interest of the ruling party, it will not suffice for the apex court to reiterate the position of law. Instead, it should explain and define in detail what constitutes "public emergency" and "interests of the nation".