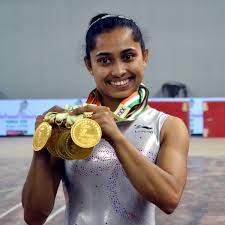 Dipa Deserves More Than a Salute

Dipa Deserves More Than a Salute

Editor-in-Chief of indiacommentary.com. Current Affairs analyst and political commentator. Writes for a number of publications. View all posts by this Author
To people in many countries, it would seem strange that the whole of India is going gaga over the mere fact that Dipa Karmakar from Tripura has become the first ever woman gymnast from India to qualify for the main draw in the Olympic games at Rio. But the fact ceases to be mere when other relevant facts are placed on the sheet. To those who know the hardships the girl has faced in coming so far, each of her medals is worth its weight in real gold. Dipa is an inspiration to many others and has shown that one can succeed if one has the fire, despite the obstacles.

Gymnastics is a neglected sport in India. No practitioner of the discipline can ever hope to earn anything from it. In fact, he or she has to spend from their own pocket for training, travel and healthy diet. Equipment is outdated and facilities non-existent apart from major cities. The matter is compounded if you are a girl, despite the fact that worldwide most gymnastics stars are women. Things get worse if you come from the most neglected North-eastern region of the country. There is very little of prize money to be won and since the sport is not followed in India, even lesser recognition or fame. If you are lucky, you could land a government job in the sports quota, but thatâs about it.

The association is forever starved of funds and the sports ministry is not focused on gymnastics. Private sponsors are not forthcoming as the discipline does not attract eyeballs. It is more than a year since the government amended the relevant CSR rules to include some categories of sports in the Schedule VII of the Companies Act, 2013. But the corporate sector has yet to show any inclination in supporting the initiative in identifying and supporting budding sportspersons in such sport categories. If a part of the CSR amount was compulsorily earmarked for sports, it will do wonders for girls like Dipa and many others like her whose dreams die for lack of support. Till then, India will continue to satisfy itself in rejoicing over such stray achievements and people in other countries will continue to wonder how we can be such under achievers, at least in sports.