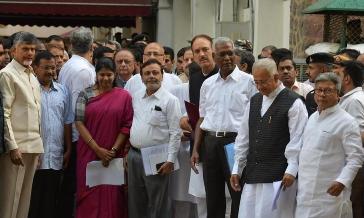 Editor-in-Chief of indiacommentary.com. Current Affairs analyst and political commentator. Writes for a number of publications. View all posts by this Author
Do the opposition parties really believe that there will be a large scale replacement of EVMs? Do they seriously believe that anyone can do so despite the constant glare the machines are under? The fact is that EVMs have been kept in strong rooms with three layers of security which is extremely difficult to breach. Over and above that, the EC has allowed political parties to have one of their persons to be on constant watch by issuing photo permits for up to three persons for eight-hour shifts. Most political parties have availed of this facility and have deputed their chowkidars.

The few cases of EVM movement and interception, sought to be portrayed as attempts at replacement by the opposition, have proved to be misinformed. In the first case, the EC said that movement of EVMs from one place to another is the standard operating procedure to ensure better protection in a larger strong room. Most opposition parties have ruled in states at one time or another. They must have known this. Yet they chose to create a needless controversy.

In the second case in UP, it was found that the trucks intercepted with EVMs were carrying the spare machines (for the uninitiated, the EC keeps spare machines at several locations to replace those that may malfunction during voting) back to their storage points. None of the machines were sealed, as is done by polling officer in charge of the booth. They were blank machines. The opposition must have known this too. Yet, again, they created a needless controversy. In both the cases, sections of the media added fuel to the fire by filing factually incorrect reports.

The opposition parties and their leaders (most of whom were hoping to play kingmakers and some of whom were even thinking of being king or queen) may not believe the exit polls. They might still believe that the people have voted against Modi. But the fact is that the opposition let Modi hijack the agenda. They let him turn the glare away from the failings of his government. They let him use constricted nationalism to portray himself as the only person who could provide a strong government. They made it easy for the NDA by remaining largely divided. Now, they might call the exit polls gossip or nautanki or whatever they feel like, but if the results are even close to them, the opposition will rue the fact that they could not knockout Modi despite the perceived anti-incumbency.