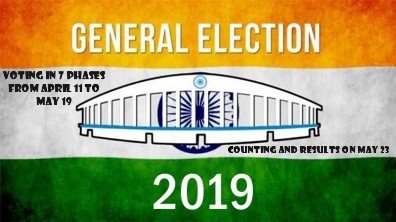 View all posts by this Author
As expected, the Election Commission has declared the schedule of the general elections over the weekend. The elections will be held in 7 phases from April 11 to May 19, with counting and results on May 23. Andhra Pradesh, Odisha, Sikkim and Arunachal Pradesh voters will simultaneously elect their state assemblies. The commission has decided not to hold assembly elections in J&K for now as the security situation has not improved.

The commission took pains to show that despite the increase in booths from 9 lakhs in 2014 to 10 lakhs this year, it has managed to so design the exercise that the phases have reduced from 9 in 2014 to 7 now. The commission also said that there will be 100% VVPAT deployment and trail coverage in at least one booth per segment. Pictures of candidates will also be displayed on the EVMs. It also said that social media entities have been warned about fake and paid news. The commission assured the country that it is well prepared to ensure free and fair elections.

Although the period of 5 weeks and four days to complete the exercise will seem stretched, given the nature of Indian elections- with money and muscle power ruling the roost - the need is to ensure that the elections are held in a free, fair and peaceful manner. To achieve this, the deployment of security personnel has to be optimum and this can only be done by phasing the elections in a manner that the desired deployment can take place without glitches. Along with this, the commission has to factor in exam schedules and preferences of states before taking the decision. Hence, it is good that the exercise will be completed in just 7 phases.

By the evening of May 23, the country will know who will govern it for the next five years. Although the commission could have advanced this date by two days given that everything has now gone digital, one can grant it the time as huge logistics are involved. It is always better to be safe than be sorry. Indian elections have continuously set benchmarks for efficiency and one is hopeful this time will not be any different. It is also hoped that the record of 66% voting achieved in 2014 will be shattered this year as voter awareness is at its peak.