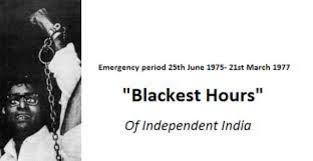 Emergency Like Situation? Not Even By a Long Shot

Emergency Like Situation? Not Even By a Long Shot

Editor-in-Chief of indiacommentary.com. Current Affairs analyst and political commentator. Writes for a number of publications. View all posts by this Author
Writers and other intellectuals have a conscience. It is pricked every time something bad happens in society. The current spate of killings of rationalists and other divisive violence perpetrated by the Hindutva brigade is being seen by many writers as a dangerous trend. These writers have decided that the current incidents have the tacit backing of the State as one of the parties in the ruling combine is the BJP, that is seen to be remote controlled by the RSS which in turn is seen as the big daddy of the Hindutva brigade. Now, writers can either write explosive pieces condemning these incidents or they can return the awards bestowed upon them by the State as they think that these awards are no longer an âhonourâ as the State has become biased.

It started with Nayantara Sahgal and then there was a procession with Ashok Vajpeyi, Sara Joseph, Shashi Deshpande, Rahman Abbas, K Satchidanandan, P K Parakkadavu and K S Ravi Kumar either leaving the Sahitya Akademy or choosing to return the cash award and citation given by it. There can be no quarrel with these intellectuals if they wish to protest certain incidents by adopting this method. But one has to differ when some of them say that an Emergency like situation is prevalent in the country now. By saying this, they are downplaying the elements of the dreaded Emergency on the one hand and taking an alarmist view of the present situation on the other.

The Emergency was imposed by the State, in fact by a misguided prime minister, to protect the interests of her family and the Congress party when it became clear that the Opposition would force her out. That her minions and hangers-on, especially her younger son, committed excesses against certain classes and communities in gross violation of the Constitution and the law was because the State backed them. The State had suspended all the rights of its citizens and prosecuted anyone who stood up or spoke out. There were no complaints against these persons as no one had the courage to register one and the police would dare not ink them in their FIR register. All those who opposed, including politicians and intellectuals, were either arrested or threatened into submission. The media was silenced through censorship.

Are these conditions really prevalent now? Those who are creating mischief belong to certain Hindu social organizations. Complaints are being lodged against them, the police are not refusing to register such complaints and these elements are being arrested too. That these cases for rioting, arson, murder and creating communal disturbances are not moving at the desired speed and prosecutors are sometimes being asked to go slow is deplorable. (Read my earlier article Murder Most Foul: Punish the Perpetrators). But no right thinking person would compare these incidents with what happened during the Emergency.

The very fact that these intellectuals can voice their concern and register their protest signifies that they are living in a country that respects the alternative point of view. The media is freely reporting these incidents and there is no censorship. What is needed now is for the civil society to stand up and tell these miscreants that such hate mongering and polarizing attitude will not be tolerated. It cannot be done through external force. These people are a minority. The silent Hindu majority has to stand up to them and prevent them from destroying the social fabric of our country. By remaining silent, Hindus who disapprove of these miscreants are committing a graver sin.