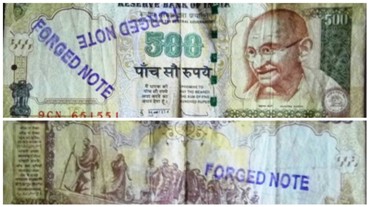 Fake Notes: Where Have They Vanished?

Fake Notes: Where Have They Vanished?

Editor-in-Chief of indiacommentary.com. Current Affairs analyst and political commentator. Writes for a number of publications. View all posts by this Author
The biggest worry emerging out of demonetization is the insignificant detection of fake notes. One of the avowed aims of the scheme was to rid the economy of these notes that were pumped in by Pakistan to destabilize the economy. But with nearly four weeks gone and more than Rs 10 lakh crore of the Rs 1000 and Rs 500 currency notes back in the banks, just 3.4% fake notes in quantum, having a face value of Rs 9.63 crore, have been returned. This can be a deceptive figure for two reasons. One, some banks are very lax while receiving the notes. Due to extreme work pressure, tellers are just counting the notes in machines and not seriously checking them for genuineness. This might mean that out of the Rs 10 lakh crore scrapped notes lying in store houses across the country, a huge percentage might be fake. Two, whenever the banks are finding one or two fake notes in a bundle, they are returning the same to the depositor after stamping them as forged note on both sides (see the lead picture of this story). No record is kept of such returned notes. Hence, banks are not in a position to record or inform the number of fake notes they have detected post demonetization.

The exact number of fake notes can never be ascertained for the simple reason that what we know are official figures of the currency in circulation. The number of fake notes said to be in circulation are just guesstimates and vary widely. The actual figure could be much higher or even much lower. We will never come to know that because they have already escaped detection and are lying in warehouses pending to be destroyed or have been returned to depositors who might have destroyed them. Hence, one aim of demonetization will always remain cloudy. The government will never be able to judge what actually happened to the fake notes and how many were actually in circulation.