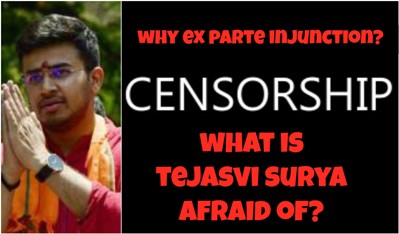 Gagging The Media: What is Tejasvi Surya Afraid Of?

Gagging The Media: What is Tejasvi Surya Afraid Of?

Editor-in-Chief of indiacommentary.com. Current Affairs analyst and political commentator. Writes for a number of publications. View all posts by this Author
Why do trial courts ignore the stated position of the Supreme Court of India in certain cases? In fact, the question should be how can they do so? The apex court has, as recently as in 2017, clarified that there is no law in India that allows pre-broadcast or pre-publication regulation of content. Yet, lower courts, especially in Karnataka, routinely favour applicants with temporary ex parte injunctions against the media to prevent it from publishing anything that might be considered unfavourable to the applicant. It seems these courts are following their own idea about what comprises a restriction on free speech.

In the latest instance, a Karnataka court has granted Tejasvi Surya, the BJP candidate from Bangalore South Lok Sabha constituency, a temporary ex parte injunction against 49 print, television and digital media entities. The order restrains them from publishing any material that might be defamatory against Surya. The order remains in force till May 26 when the media houses will be heard. By that time the results of the elections will be declared and Suryas purpose will be served. The young candidate from Bangalore is starting his life in electoral politics on the wrong foot and is likely to lose many admirers by choosing this course of action.

In issuing the order, the Karnataka judge cited the Karnataka High Court decision in the case AK Subbaiah vs BN Garudachar in 1986. But it defies logic that the judge limited himself to a high court order and chose to ignore several apex court orders  R Rajagopal vs State of TN (1994), Romesh Thapar vs State of Madras (1950) and Brij Bhushan and Anr. vs State of Delhi (1950), among others  that uphold freedom of speech and discourage ex parte injunction.

The injunction granted to Tejasvi Surya effectively means that no media house can publish or broadcast any material that can be deemed defamatory. This is pre-censorship or prior-restraint, which is the vilest form of gag. An ex parte injunction is defined as a judicial proceeding, order, or injunction is said to be ex parte when it is taken or granted at the instance and for the benefit of one party only and without notice to or contestation by, any person adversely interested." But this cannot be done without reason. There has to be a prima facie case and strong reasons for granting such orders. Further, in this case, it is not the media that is adversely affected  it is the people of Bangalore South who will be choosing an MP without having the benefit of knowing things about him which the candidate is preventing them from publishing or broadcasting through this injunction order.

Instead of gagging the press, Surya should have presented his point of view if and when anything that he considered defamatory was published against him. He could have moved court against the erring media house. That is the way it should be done in a democracy. Restraint orders just on a future assumption of guilt are against the rule of law. When these orders are against the media, they strike at the very foundation of the fourth pillar of democracy. The trend of granting such orders by lower courts in Karnataka is dangerous and the state high court and the Supreme Court must look into the matter and prevent the lower courts from issuing such orders at the drop of a hat.