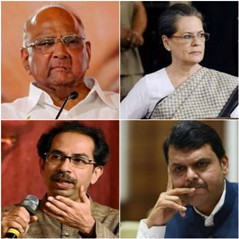 Government In Maharashtra: Many More Twists And Turns Before The Climax

Government In Maharashtra: Many More Twists And Turns Before The Climax

It is not easy for parties with different ideologies to come together and form the government, even at the state level. The talks of a common minimum programme (CMP) and adjustments are all good but there are many other prickly points in such arrangements that are seldom thrashed out to perfection, leading to such governments falling sooner than expected. Hence, it is not a surprise that despite the initial excitement and commentaries about how the coming together of the Shiv Sena, the NCP and the Congress would bring new equations in Maharashtra politics, the alliance between the three has not materialized yet. In fact, Sharad Pawar admitted that more talks were needed to seal the alliance after meeting Sonia Gandhi yesterday.

It is now clear that all the reports appearing in the media about how the parties had agreed on a CMP and had even decided on how many ministerial berths each party would get are all conjectures. All three parties have a single point agenda - not to let the BJP form the government at any cost. The Shiv Sena is miffed with the BJP for not conceding the post of the chief minister by rotation which it says was agreed upon but which the BJP denies, while the NCP and the Congress have always been against the BJP and would not like it to form the government. But both the NCP and the Congress also have serious reservations against the Shiv Sena and this is creating hurdles in the path of a successful alliance between the three.

Add to this the reports that are appearing in the media about Ramdas Athawale, the president of the Republican Party of India, a constituent of the NDA, mediating in the dispute between the BJP and the Sena. Athawale has said that he is working on a formula whereby the BJP will keep the chief minister's post for three years and then the Sena will get it for the next two years. He is confident that if BJP president Amit Shah intervenes and if his formula is applied, then there might yet be a BJP-Sena government in the state. This has led the NCP and the Congress not to fully trust the Shiv Sena as they feel that given the same ideology and the long association between the two, the Sena might lean towards the BJP in a crunch situation, despite assurances to the contrary by Uddhav Thackeray.

Hence, it is difficult to guess who will form the government in Maharashtra despite the Shiv Sena breaking away from the NDA and hitting out at the BJP almost on a daily basis through its mouthpiece Saamna as also in statements made by Sanjay Raut and the Thackerays. While the newly-elected legislators of both the NCP and the Congress have been reported to have voted for an alliance with the Sena, the top leadership of both the parties is not convinced of Sena's intentions. It is obvious that while the legislators are looking at the short-term gain of being in government, the leadership of both the parties is more concerned about the long-term fall-out of the decision. It seems that the issue is going to see many more twists and turns before it reaches the climax.