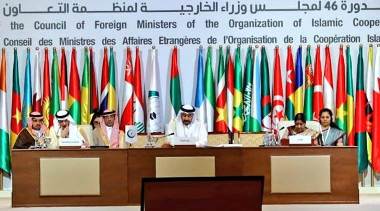 View all posts by this Author
A day after Foreign Minister Sushma Swaraj addressed the conclave of Organization of Islamic Cooperation (OIC), the body lobbed volley after volley of resolutions that took no cognizance of the Indian position and went after India in Pakistan-sponsored moves. It once again proved that most Islamic bodies around the world do not take any notice of the fact that India has the second largest Muslim population in the world after Indonesia. (This fact is now disputed as the new Census in Pakistan shows that it has more Muslims now than India, but on the other hand, a report in The Khaleej Times shows that India will overtake Indonesia to become home to the worlds largest Muslim population by 2050).

Having India as a member in any body that seeks Islamic cooperation is in the interests of Indian Muslims. But it seems these organizations are meant for countries that have Muslim majority where people of other religions are treated as Kafirs and have lesser rights and constitutional guarantees. Moreover, these countries have to be ruled by Muslim parties. Hence, even when the OIC decided to invite India as a guest of honour they had it in mind not to support any of Indias stand against a fellow Muslim country, especially now as in their opinion the country is being ruled by the so-called Hindu nationalists who are inimical to the interests of the Muslim minority in the country.

In other Pakistan-backed resolutions, the OIC members expressed grave concern over the Indian violation of Pakistani airspace, affirmed Pakistans right to self-defence; and urged India to refrain from the threat or use of force. Another resolution welcomed Prime Minister Imran Khans renewed offer of dialogue to India and the goodwill gesture of handing over the captured Indian pilot. The resolution had called for restraint and de-escalation as well as the need to resolve outstanding issues through peaceful means. Yet another resolution asked the Indian government to rebuild the Babri Masjid.

It is clear from what finally transpired at the OIC conclave that other than getting itself heard, India does not have any clout in any body of Islamic countries. Despite the speech by Swaraj, there was no reference to terror, the suicide bombing in Pulwama and Pakistan's support to terror groups. Hence, either the MEA should build rapport with these bodies or India should not yearn to sit on the high table or even be invited a guest. One knows that it will harm the interests of Indian Muslims if India is not represented in these bodies, but given their attitude, closed mind and blind support for Pakistan, it is better if India stays away or downgrades its participation  if invited  to officials from the MEA.