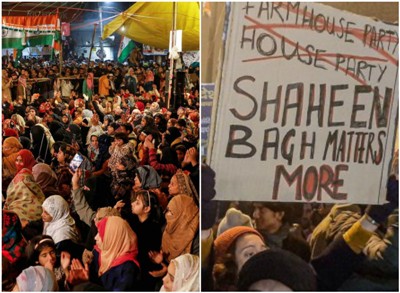 Is There Actually A Need To Mediate in Shaheen Bagh? If They Are Inconveniencing the Public, They Should Shift, If Not, They Can Remain There

Is There Actually A Need To Mediate in Shaheen Bagh? If They Are Inconveniencing the Public, They Should Shift, If Not, They Can Remain There

The Supreme Court is spot on in saying that while a set of people have the democratic right to protest peacefully against anything of importance, they do not have the right to inconvenience another, maybe much bigger, set of people by their actions. The court categorically said that there is a need to strike a balance between the rights of the protestors and the rights of the general public. While the court said this in the context of the Shaheen Bagh protest that has blocked a major and busy thoroughfare in Delhi which has inconvenienced the general public, it holds true for any protest by a group of citizens, any organization or a political party.

But one feels that the Supreme Court has erred in appointing a team of mediators to talk to the protestors about shifting to a less inconveniencing venue. There is either the fact that the current venue is inconveniencing the general public or the fact that it is not. If it is the former, then the court should have taken cognizance of the fact and ordered the protestors to shift. If it is the latter, then the court should have allowed them to keep protesting from the current venue. But why talk with a set of people who have willfully chosen a venue that is causing maximum inconvenience to the general public. In one's opinion, it will set a dangerous precedent and other people at other times would willfully occupy public spaces to hold protests that will throw traffic out of gear and inconvenience the general public.

There is no doubt that the Shaheen Bagh protestors have the right to protest about CAA as they feel that it will be detrimental to the Muslim community. But will their views be better heard if they block roads? Or will they be better heard if espoused articulately and forcefully from any venue? Hence, before asking the government to repeal the act, they should outline what they feel is offensive in it for them as Indian citizens? Critics of the act say that it makes religion as the test of citizenship. Is that true? The CAA seeks to grant accelerated citizenship (the refugees would, in any case, get citizenship in 11 years, CAA just shortens the waiting period to 5 years) to persecuted minorities from neighbouring countries like Pakistan, Bangladesh and Afghanistan. The persecuted minorities for this amendment have been defined as Hindu, Sikh, Parsi, Buddhist and Christian. It is obvious that since all the three countries are Muslim-majority nations, Muslims cannot be part of the persecuted minorities there. Hence, it is logical that Muslims have not been included. What is wrong with that? How does it affect the rights of Indian citizens who are Muslim and why are they protesting against this?

Actually, the main protest is against the NRC and the NPR, which is another matter altogether. The way the NPR questionnaire has been designed and the way the NRC exercise was conducted in Assam, it is clear that it is aimed at profiling citizens based on their religion and such an exercise has no place in a secular nation like India. Although Amit Shah has said that people need not answer questions related to the date of birth and place of birth of their parents in the NPR form and that no documents need to shown, the concerns remain. If what Amit Shah has said will be done, then what is the need for the NPR? In any case, the Census is due in 2021 and since a major part of the NPR exercise is just a duplication of the Census, the government should seriously consider dropping the exercise. But the protestors should also see the difference between the CAA, the NPR and the NRC and stop linking the three. Else, they should spell out clearly and in detail how they think that the CAA will infringe on any of their rights as Indian citizens. The government will then be bound to answer, regardless of the fact that it is an act passed by the parliament of the country. Better still, everyone should wait for the Supreme Court to decide whether what the parliament has passed passes the constitutional test.