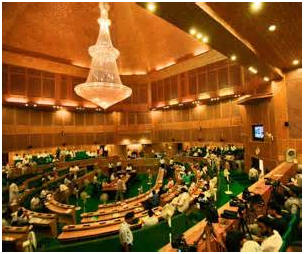 J&K: Was It Proper To Dissolve The Assembly?

J&K: Was It Proper To Dissolve The Assembly?

Editor-in-Chief of indiacommentary.com. Current Affairs analyst and political commentator. View all posts by this Author
The J&K governor Satya Pal Malik was sent to the state with the express purpose of exploring possibilities of installing an elected government in the state. But when push came to shove, the governor dissolved the assembly and pushed the state towards fresh elections. The first bid for forming the government was made by a combined opposition that included the PDP, the National Conference and the Congress. But immediately thereafter, there was a revolt in the PDP with 18 legislators breaking rank. Soon, Sajjad Lone made a counter bid with support from the said 18 legislators and the BJP.

Maybe the governor was swayed by the revolt in the PDP ranks in taking the decision to dissolve the assembly. Maybe he thought neither combination would provide a stable government. But whatever be the reason, there should at least have been an attempt to install an elected government. Maybe the combined opposition should have been given the first chance and if they failed, Sajjad Lone should have been asked to try to form the government. It is always better to attempt forming a government from already elected legislators rather than call for an untimely and expensive election, especially in a sensitive state like J&K.

Having said this, it also needs to be recognized that the governor is the best judge of the ground reality. In J&K, several extraneous factors also need to be weighed in. The governor has been consulting a wide range of opinion in the state for the last few months. He has had detailed discussions with the army over the prevailing security situation. Maybe he thought that a weak government that had low chances of surviving the remaining term was a bad bet. Maybe he thought that people should be asked to provide a fresh mandate as to who should rule the state. Constitutionally, the governor was within his rights to dissolve the assembly.

But the situation is that with voters polarized - those in Jammu area favouring the BJP and to some extent, the Congress and those in the valley favouring either the PDP or the NC with some independents  the chances of another hung assembly looms large. In that case, renewed attempts will be made to form a coalition government. Hence, the same could have been tried in the just dissolved assembly first without forcing the state into conducting another election.