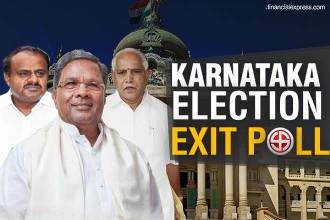 By our team of in-house writers. View all posts by this Author
Nearly 70% people voted in Karnataka, a dip of 1.3% from the last elections in 2013. Bangalore showed it was not interested  only 50% voted, which was a huge dip of 7.6% from 2013. The exit polls, as usual, showed different results. Of the six polls that came out with their assessments, two showed BJP forming the next government while one gave it to the Congress. Of the other three, two found BJP to be the largest party in a hung house, with one even saying that it might form the government and another gave Congress the largest party status. An average of all polls showed that it is going to be a hung house with BJP the largest party. All polls agreed on one thing: that the JD(S) will get anywhere between 20-40 seats, brightening its chances of playing kingmaker.

By applying the unscientific method of finding an average of all polls, it is found that the BJP will emerge as the largest party with 103-104 seats. The Congress will trail at 87 seats and the JD(S) will emerge the possible kingmaker at 29-30 seats. This scenario confirms the earlier findings that this was a wave-less election with muted anti-incumbency and a hung house was the most likely result. It also confirms that the Modi blitz at the end failed to sway enough voters to make a difference to BJPs fortune. Yet we have to wait till the final results are declared, as exit polls have a tendency of going horribly wrong, to make better assessments.