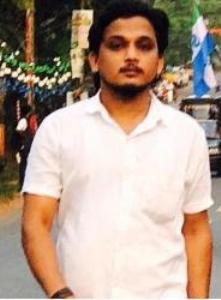 Editor-in-Chief of indiacommentary.com. Current Affairs analyst and political commentator. Writes for a number of publications. View all posts by this Author
The CPM has rightly been condemning the post-results violence in Tripura against its party cadre. It has also been highlighting the way party offices are being vandalized and captured by BJP and its affiliates there. But it has been strangely silent on what is happening in its backyard in Kerala. This exposes the double standards of the party and its so-called liberal supporters, in the media and elsewhere.

In Kannur, the hometown of chief minister Pinarayi Vijayan (who also holds the home portfolio), 29-year old Shuhaib, a Youth Congress block president, was brutally murdered by alleged cadres of the CPM. This was latest in line of political murders in that state where RSS-BJP and Congress workers are being intimidated, harassed, manhandled and murdered with increasing frequency. Either the CPM is not convinced of peoples support despite winning or it wants to ruthlessly eliminate all opposition.

Strangley, the police were very lax in their investigations. The chief minister kept silent for more than a week. The CPM kept denying that its workers had any hand in the murder. It was only after a Congress leader showed documents proving that T P Chandrasekharan murder convicts were given parole just before Shuhaibs murder that things started moving. Two CPM men were arrested. But Congress says that these are proxy arrests and the paroled convicts from the Chandrasekharan murder case must be probed. Almost 15 days after the murder, the party has expelled 4 workers but is it to protect the real culprits and hide the conspiracy behind the murder?

If the CPM unleashes such violence in the state it rules, it must be prepared to get back the same where it loses. This is not to say that either of the two situations is good or correct, but such is the depth politics has plumbed in India that musclemen and violence have become an integral part of the political culture. Starting from scaring away voters likely to vote against them to booth capturing to unleashing violence to assert supremacy or liquidating political rivals, parties indulge in all kinds of criminal activities to keep their flag flying high.

The CPM, despite its proletariat roots and ideology of brotherhood of all mankind, has never shied from flexing its muscles. In fact it has been known to be ruthless when it comes to protecting its territory. The way the CPM goons tried to murder Mamata Banerjee in 1990 when she was a rising Congress star getting popular by the day is fresh in memory. Hence its current noise about Tripura is akin to the pot calling the kettle black.