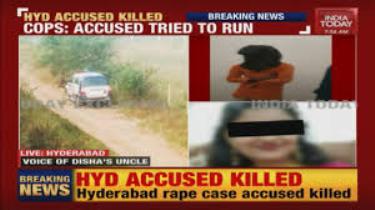 Killing Rape Accused In Hyderabad: Inefficiency, Instant Justice Or Something Else?

Killing Rape Accused In Hyderabad: Inefficiency, Instant Justice Or Something Else?

It is strange that despite being trained to fire at the lower part of the body of fleeing criminals, especially if they are unarmed, police in India more often than not kill them by firing in an indiscriminate manner. This is unpardonable. The latest such thing happened in Hyderabad when the police killed all the four persons accused of raping a veterinary doctor a few days back as they tried to flee from the spot where they committed the crime after they were taken there to reconstruct the crime scene.

It is a different story if the police kill criminals who are armed and retaliate with fire when challenged. In a gun battle, it is neither possible nor desirable to show any leniency. For, the criminals will aim to kill and the police have to neutralize them. But when the fleeing criminals are unarmed and are just trying to escape from custody, the police can always catch them by running after them. If that is not possible due to any reason, and if firing becomes the last resort to stop them, they should always be hit on the legs to stop them from running.

Killing fleeing rape accused, like it was done in Hyderabad, immediately raises questions about the motives of the police. Were they liquidated to avoid the court case that would have ensued and perhaps highlighted the shortcomings of the police? Were they liquidated to avoid a 'bad' press? Were they killed to mete out instant justice, as is being demanded by certain quarters? Hyderabad police have a lot to answer why the criminals were not recaptured and why they were shot dead. Were so many policemen incapable of recapturing just 4 criminals? Were the fleeing criminals national champions in racing? Did the police not have vehicles in which they could have chased and overpowered them?

There should be a departmental inquiry to find out who gave the orders for the shooting and why the policemen did not shoot on the legs. It should also be found out whether the policemen made an attempt to recapture them or just liquidated them when the opportunity arose. The testimony of criminals often provides the police, detectives and crime historians a peep into how the criminal mind works. It helps the police crack similar cases in the future, spot criminals in the making in advance and helps the society in helping those who are likely to or have already gone astray. If all alleged criminals (since they were not convicted by a court of law, we will never know whether they were actually guilty or if others were also there apart from the four arrested) are liquidated the way they were in Hyderabad, we will never understand how the minds of criminals work. Extra-judicial killings are not for civilized societies and will give the police the power to do a lot of mischief.

This article was written before the police briefing. The police have said that they were forced to fire as the criminals attacked them, snatched their weapons and opened fire on them. I have a few questions for the police:

1. Since when are criminals taken to the scene of the crime without handcuffs or ropes tied to their waist? If these criminals were taken without following the standard procedure, and their hands were free so that they could get hold of sticks and stones to beat the policemen with and then snatch their rifles, the Hyderabad police have a lot to answer.

2. Did senior officers accompany the convoy? If not, why were the criminals in such a sensitive case allowed to be moved in such a casual manner?

3. How did the criminals snatch the rifles and why were the rifles in "unlocked" condition? Is it standard procedure to keep rifles unlocked? If not, the police must answer why were they in a ready to fire condition?

4. The original question still remains. Did all criminals snatch the guns? If not, why did the police not fire on their legs and why did it fire to kill?

I, for one, am not convinced with the police version of the events.