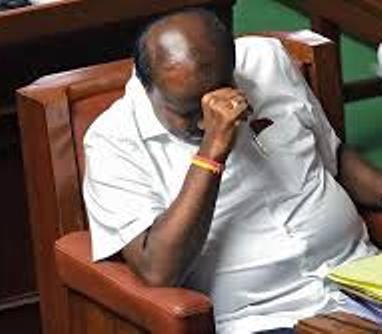 Finally, the sordid drama that was being played out in the Karnataka assembly has ended? Or has it? Although the HD Kumaraswamy-led Congress-JD(S) government has fallen and most probably a BJP government led by BS Yeddyurappa will be installed in its place, will it be able to rule the state undisturbed? For, it will be dependent on Congress and JD(S) rebels as it has only 105 MLAs of its own in a house of 224, unless it manages to win at least 8 of the 16 seats that will have fresh elections as a result of the resignation of 16 MLAs from the Congress-JD(S) alliance. But will the BJP be able to absorb the rebels in its rank and give them tickets from the same assemblies? Will its local leaders allow that? These are interesting questions that will decide the fate of the BJP government if it takes up the challenge.

What will also be keenly watched is what the BJP does with the rebels who have helped it to come back to power. For, the drama being staged in the Karnataka assembly (and before that in the Speakers' chamber and the Supreme Court) was essentially over the status of the rebel MLAs. The alliance wanted the Speaker to disqualify them to prevent them from becoming ministers in any new government led by the BJP. If their resignations are accepted, they can become ministers and then stand for election within six months. But if they are disqualified, they will first have to be reelected in order to get a berth in the ministry. But the issue has now become pointless as there will be a new Speaker and he will be from the BJP fold. He is likely to accept the resignations.

The Congress and the JD(S), despite knowing that they did not have the numbers, kept delaying the trust vote only to teach the rebels a lesson. They tried all the tricks in the book, including threats, coercion, trying to influence the Speaker and trying to use the Supreme Court to get relief. But nothing worked for them. With the Supreme Court deciding not to hear the plea urgently and also not to interfere in the constitutional authority granted to the Speaker, the legal route was closed. The Speaker, too, decided to work at his own pace and did not take any decision on whether to accept the resignations or to disqualify the rebels. The rebels did not budge from their original stand, despite the Congress and the JD(S) agreeing to meet most of their demands, including changing the chief minister. The alliance also tried to bribe them by offering them plum posts, but to no avail.

HD Kumaraswamy should have resigned once it was clear that the numbers were against him. He would have then held the moral advantage and could have gone hammer and tongs at the BJP for having engineered the defections and bringing down his government. But as things stand now, Kumaraswamy will be remembered for having presided over the sorriest episode in Karnataka politics. One feels that after this, the Deve Gowda clan and the JD(S) have a very bleak political future. They have paid a huge price for trying to hit above their weight by insisting on the top post when forming the alliance with the Congress. Most state Congress leaders and MLAs were not in favour of that and some of them brought down the government once it became clear that the alliance had lost the people's trust after the drubbing it received in the Lok Sabha polls.