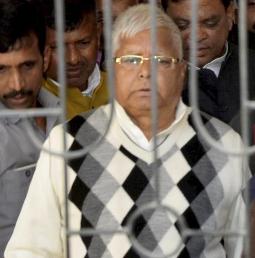 Editor-in-Chief of indiacommentary.com. Current Affairs analyst and political commentator. Writes for a number of publications. View all posts by this Author
Laloo Prasad has been convicted once again in the fodder scam. With this, his hopes of getting out on bail will also vanish as higher courts usually do not grant bail to habitual offenders and a second conviction puts Laloo firmly in that bracket. While Laloo, his son Tejeshwi and other RJD leaders have hinted that there was gross miscarriage of justice in the Ranchi court and they would approach higher courts for redress, the fact is that there have already been two convictions and more cases are in various stages of trial. Laloo has little chance of salvaging his shredded reputation. A section of the media too did nothing to salvage its reputation as news was flashed that Laloo had been acquitted even before the relevant part of the judgment was read out. Who was in such a tearing hurry to bail out Laloo?

The fodder scam, though comparatively peanuts in front of the mega scams during UPA regimes, was big enough and involved too many treasuries in undivided Bihar. It allowed bureaucrats and politicians to loot peoples money on an unprecedented scale. The biggest factor in the scam was that the largesse was divided among a huge number of people to seal the lips. Many innovative and ingenious tricks were used to siphon out money. That is the main reason that it went on unreported for so many days.

But now, after unacceptable delays of nearly two decades, as the cases come to termination one after the other, the guilty will be brought to book. Despite Laloos earnest denials, his culpability, even if not his direct involvement, has been proven in court, not once but twice. Obviously it will be done in the other cases too, since Laloo, like a giving emperor, allowed his underlings to loot the state unchecked. Though Laloo has the option of appealing against the order, given the findings in the lower court, he cannot expect much relief in higher courts.

But the bluster has not gone. In a series of tweets after his latest conviction, Laloo compared himself to Nelson Mandela, Martin Luther King and B R Ambedkar in alluding that he was being seriously wronged. Laloo and his party leaders also brought caste into play and alleged that their supremo was being harassed and convicted only because he was one of the downtrodden and fighting for their cause. Immediately after the conviction, his twitter handle had a post saying "powerful people and powerful classes always managed to divide society into ruling and the ruled classes. And whenever anyone from the lower hierarchy challenged this unjust order, they would be deliberately punished." But scams and money have no caste and people across the spectrum have been caught dipping their hands in public coffers to replenish their private ones. Laloo and his cronies are no exception.

It now proves that Nitish Kumar took the right decision in getting out of his alliance with Laloos party. The ball is now in Rahul Gandhis court. What will the Congress do with the doubly tainted Laloo? Will it risk continuing with the alliance? Or will it also dump Laloo? What happens if the outspoken Tejeshwi counters that the Congress is also tainted as there are several scam cases pending against its leaders? Lets wait and watch whether they stick like birds of a feather or whether the new-found confidence of Rahul Gandhi makes him part ways with the RJD.