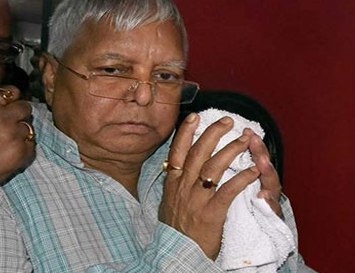 Editor-in-Chief of indiacommentary.com. Current Affairs analyst and political commentator. Writes for a number of publications. View all posts by this Author
Why is it that everything is given a political hue nowadays? Why is expert or technical opinion either not desired or not accepted? Why do people, especially politicians, jump to conclusions as soon as some issue comes up?

The latest in the line is the Yadav clan that is alleging a plot by Narendra Modi to kill patriarch Lalu Prasad by getting him released from AIIMS in New Delhi. Before this, Rahul Gandhi had alleged a conspiracy when his aircraft developed snags mid-air and experienced turbulence.

Lets take Lalu Prasads case. When jailed in the fodder scam case, Lalu developed health problems. The local hospital in Ranchi referred him to AIIMS. He was brought there and treated for his ailments. The doctors at AIIMS did not refuse him admission. They cared for him and gave him the best possible treatment. Now that he has recovered from what he was admitted for, in their considered medical opinion, he need not stay any longer at AIIMS and should go back to the Ranchi hospital for recuperation. This is what the medical team says.

But Lalu and his clan do not want him to leave the five-star trappings of AIIMS and go back to the general hospital in Ranchi. They have alleged that it is being done on PM Modis orders to finish Lalu. They forget that staying in a hospital like AIIMS is a luxury for a convict like Lalu Prasad and is possible only because he is a renowned politician. How many ordinary mortals, even if they are close to dying, will be admitted to AIIMS from jail? Secondly, AIIMS is a speciality hospital that tends to critical cases. Once patients move back to non-critical status, they have to make way for others who need the facility more.

Instead of blaming Modi, Lalu should express his gratitude to the AIIMS doctors for getting him back to good health in quick time. He should go back to the Ranchi hospital and recuperate till such time the doctors there think he needs hospitalization. After that, he should go back to his jail cell, for that is the only suitable place for a criminal like him.