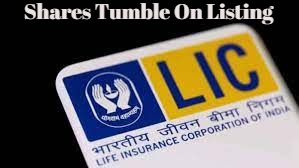 LIC Shares Tumble On Listing Even As The Sensex Gains

LIC Shares Tumble On Listing Even As The Sensex Gains

But the overall sentiment for the stock was negative. Market operators and experts said that the size of the issue and the lack of interest from FIIs, along with the overall negative sentiment in the market (although the markets were positive today with the Sensex gaining 1000 points at one point) had resulted in such a lacklustre listing. With most shares in the green, LIC was an exception and this was mainly because those who had applied for listing gains were in a hurry to offload their shares.

Most experts have pointed out with insurance penetration low in India, the prospects for LIC are bright and those who can should hold on to the shares. They have set stop loss at Rs 800 per share. Some have also pointed out that LIC is expected to declare good dividend this year as it paid no dividend last year. Overall, despite its horrible listing price, it is a share that one can hold.