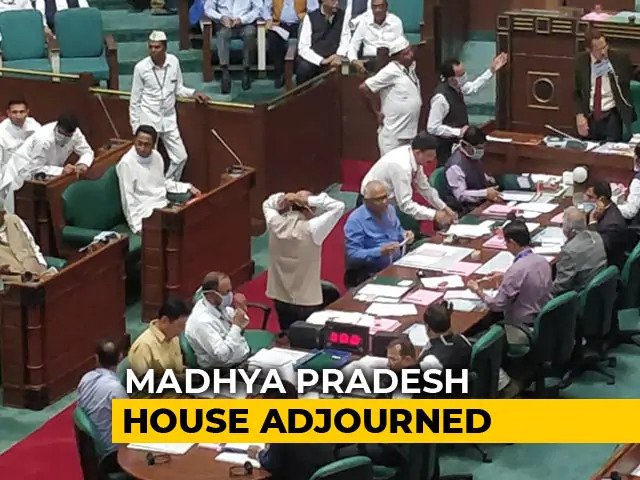 Madhya Pradesh: Assembly Adjourned And A Warning From The Governor

Madhya Pradesh: Assembly Adjourned And A Warning From The Governor

There was high drama in the Madhya Pradesh assembly today as ignoring the governor's directive to seek a trust vote today, the government adjourned the house sine die until March 26 over the coronavirus scare. Citing examples of other state assemblies that had been so adjourned, the Congress government in MP was of the opinion that the situation was not conducive to holding the session of the house. Governor Lalji Tandon walked out of the house after reading just the last page of his address and said that "all must follow the rules under the Constitution so that dignity of Madhya Pradesh remains protected."

The recent example of the Karnataka assembly does not suggest so. When a similar situation arose in the state assembly in Karnataka in July last year, the vote was delayed for many days by using several ruses despite the governor fixing several deadlines. Every deadline was ignored as the assembly debated on the issue at its own pace and the Speaker could do little to control the proceedings. Further, the BJP has approached the Supreme Court against the adjournment of the MP house. Under these circumstances and given that the coronavirus scare is genuine, was it proper on part of the governor to issue a letter with such a stern warning?

The Kamal Nath government in Madhya Pradesh is living on borrowed time. For all practical purposes, its mandate to govern has lapsed as 22 Congress MLAs have resigned and brought its strength to below the threshold needed to continue in power. Nath is perhaps hoping that if he delays the vote by some days, he will be able to get back some of the MLAs and save his government. That looks highly improbable right now. Hence, his ploy to adjourn the house makes little sense. One thing is certain though: there is more drama in the offing in Madhya Pradesh.