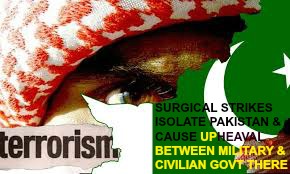 Editor-in-Chief of indiacommentary.com. Current Affairs analyst and political commentator. Writes for a number of publications. View all posts by this Author
The continuous criticism of the government for making the surgical strikes public and trying to gain political mileage out of it needs to be repudiated in the strongest of terms. Those who are making the charges, the Congress being in the forefront, need to understand one thing clearly that there were no such strikes in the past. The Congress is claiming that there were such surgical strikes in the past too but they did not make it public nor do they indulge in chest thumping. While chest thumping cannot be condoned and the prime minister has warned ministers and party leaders against it, making the strikes public was necessary and that is proved by subsequent reactions world-wide, the isolation of Pakistan, cancellation of the Saarc summit, support for India on the fight against terrorism and upheavals in the politico-military establishment of Pakistan.

When the Congress and some commentators in the media claim that surgical strikes happened in the past too, they fail to understand the meaning of the words. What happened in the past was that during ceasefire violations on the LoC if a particular Pakistani post was particularly pesky, the Indian soldiers would cross over and silence it. That was a standing order as part of ongoing military strategy along the border. It was done at one border outpost and there was no special planning for it. It was not based on current intelligence input and most importantly, it did not require the decision making power of the executive to give the go-ahead for such an operation. It was akin to a chowkidar leaving his post to silence a pesky dog that was disturbing his sleep. The Congress had reduced the soldiers on the borders to chowkidars who just tried to prevent the terrorist from entering. They never went after them and that is the reason they were emboldened enough to carry out such attacks as at the Parliament and Mumbai in the past and Pathankot and Uri now.

The current operation was based on specific military intelligence that terrorists had gathered at those camps and were ready to enter India. This report was communicated to the government. There was a strategy meeting on the report. The military was asked for its opinion and the strategy it wanted to adopt to neutralize the threat. After the presentation by the military authorities, the government took the decision to give the go ahead. The operation was huge as it involved strikes at terror camps in more than five locations. Some of these camps were close to Pakistani army camps and the risk of escalation needed to be factored in. Collateral damage needed to be avoided. If the Congress or others think that what happened in the past was similar, it is they who are trying to undermine the surgical strikes and are trying to gain political mileage out of their supposed past actions. But no one in the Army has supported their claims of similar opertaions in the past.

Further, if the opposition politicians and some in the media are not able to understand the importance of the strategy to make the strikes public, they are either consciously ignoring the gains it has brought for India or are trying to create a situation that will embarrass the government or give Pakistan a handle to buttress its claim that there were no such strikes. The day India made the announcement; the Pakistan government was shocked. It had thought that the Indians would keep quiet about it. Then it started issuing incoherent statements that further lowered its prestige in the world. Obviously the Pakistanis could not confirm the strikes as that would have been admission of the fact that terror camps exist in PoK. But what was sad was some in India also took that position. The most conclusive proof of the strikes and the killing of terrorists was when Hafiz Saeed said in a speech that he will show India what surgical strikes meant. This clearly showed that the terrorists were rattled by the strikes since they always thought that India would never hit their camps.

Public admission of the strikes turned the worlds attention to the existence of terrorist camps inside Pakistan. It also brought into focus the problem of cross-border terrorism and how India was suffering from infiltrators bred in such camps by the Pakistanis (and then passed off as non-state actors). Most Saarc nations were fed up with Pakistan and its double-speak on terrorism. They were waiting for India to take the lead and as soon as India opted out of the Saarc summit in Islamabad, Bangladesh, Afghanistan, Bhutan and Sri Lanka made public their displeasure over the issue and boycotted the summit. It was not a small victory for India. The Saarc is now dead for all practical purposes and India should explore a regional alternative without Pakistan. Apart from this, there was no support for Pakistan at the UN general assembly. Its closest friend China snubbed it on the issue. The US categorically asked Pakistan to mend its ways. Russia too pitched in with a warning. Most other nations followed suit. Pakistan stood isolated in the world community.

What followed was an upheaval in Pakistan. For the first time ever, the prime minister of the country publicly called upon the army to act against terrorists. MPs cutting across party lines started demanding that Pakistan act against internationally designated terrorists who had been provided a free run in the country. What was kept under wraps for a long time spilled out in the open. One MP has said that diplomats have not been listening to Pakistan's position on Kashmir and are instead raising questions about Hafiz Saeed. Although no one in Pakistan is yet admitting that the terrorists are bred and supported by the ISI and the Army, there is increasing realization in the country that they were doing more harm than good. Suddenly, Kashmir was not an issue and terrorism took centre-stage. India has always wanted this. It wants Pakistan to first dismantle the terror apparatus it has nourished and continues to support in order to have any meaningful talks on Kashmir. If the surgical strikes can force Pakistans hand on this issue, it will only be possible because they were made public. The farcical logjam of India claiming Pakistan-supported terror attacks and the Pakistanis being in a state of denial needed to be broken and the public disclosure of the surgical strikes by India has achieved that.

The Congress and others, including some in the media, should admit this fact and laud this strategic, and subtle, shift in Indias Pakistan policy that is bringing immense foreign policy gains for the country.