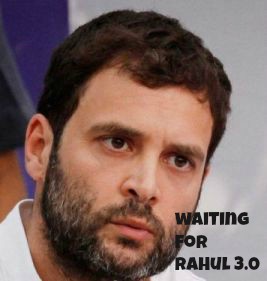 Holding an extreme view and carting the ball out of the park is what interests him most. He is a hard hitter at all times. Fasten your seatbelts and read. View all posts by this Author
The recent attitude the Congress and Rahul Gandhi are showing stems from two things. First, Rahul Gandhi has a lot of confidence in his new, improved avatar. He thinks he has got the measure of Modi and is a natural to lead the opposition alliance and hence be the prime minister of the nation. Second, the party thinks that if anyone can take on Modi, it is Rahul. Their bloated sense of self-importance was furthered by the tough fight they gave in Gujarat (although the courtesy of Hardik Patel, Jignesh Mevani and Alpesh Thakor) and the conquering of big states like Rajasthan and Madhya Pradesh in the recent assembly elections.

But the latest opinion poll, conducted by Times Now-VMR, shows that their balloon is going to be pricked everywhere except Punjab. While the party is likely to sweep the border state, the people of Rajasthan and Madhya Pradesh are not likely to vote for the Congress. Hence, the party is likely to get less than double the seats it got in 2014. That is not saying much as the Congress had got fewer than 50 seats then. The UPA is expected to get just 135 seats, marginally more than the 125 seats the other parties, not aligned with the two major alliances, are likely to get. It is becoming increasingly clear that the overdrive that Rahul went into over the Rafale deal has not cut much ice with the voters. Further, the voter is also miffed with the Congress over its response to the surgical strikes.

Rahul Gandhi and the Congress have made a huge mistake by not entering into strategic alliances. All talks of mahagathbandhan vanished once most of the opposition leaders refused to accept Rahul Gandhi as the leader of the alliance. The Congress tried to play big brother ignoring ground realities. It tried to trample upon the regional parties leading to complete alienation with SP and BSP in UP, who went to announce their own tie up without the Congress. Although the Congress could not have made much of a mark in the state, the tie up with SP-BSP would have given healthy signals to other parties that it was willing to be flexible. As things stand now, the Congress has only RJD and DMK among the bigger regional parties, with Mamata Banerjee, Chandrababu Naidu, Naveen Pattanaik and KCR all going their own way. Reports are emerging that the Bihar alliance with the RJD and other parties is also in trouble.

From the dreams of displacing Modi and installing Rahul as prime minister, the Congress must now resign itself to another five years on the opposition benches. Maybe, just maybe, this time it will not face the ignominy of not having its leader officially designated as the leader of the opposition. Once the elections are over and the Congress realizes the folly of not conceding space to regional parties and entering into alliances, it will have to think of sending Rahul on another sabbatical. Maybe, Rahul 3.0 will be better placed to give Modi a run for his money in 2024.