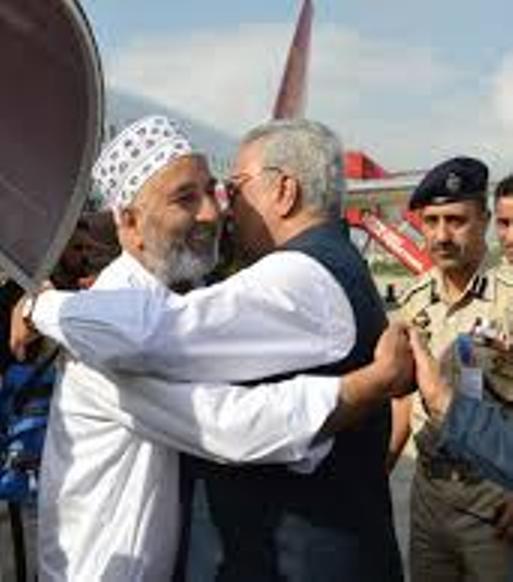 It is shameful that a country that has captured more than half the territory that was legally ceded to India by its ruler in 1947, that has 'gifted' a part of that captured territory (the Shaksgam Valley or the Trans Karakoram Tract) to China despite not owning it and that continues to conduct a proxy war against India to destabilize the remaining territory of Jammu & Kashmir has the gall to internationalize the issue of India rearranging the boundaries of its own states. It was just the shortsightedness and, if one may add, laziness, of India's past policymakers that instead of India putting pressure on Pakistan in international forums to return the territories held by it in Pakistan Occupied Kashmir (PoK), it has to face unnecessary pressure from Pakistan over J&K. But things will now change and India's defence minister, Rajnath Singh, has already said that any further talks with Pakistan will now be for PoK and J&K will not be on the agenda.

The establishment and the media in Pakistan may gloat over the fact that the UNSC chose to hold a closed-door meeting to discuss Kashmir. But the fact and the rule is that any member can ask the Council to discuss any pressing matter of international importance. That Kashmir was not discussed for nearly five decades bears testimony to the fact that even the UNSC considers it an issue to be settled bilaterally between India and Pakistan. This time too, Pakistan's efforts, supported by China, to take the issue to UNSC came to naught as after hearing out the two countries, and India, the Council chose not to issue a formal statement and the meeting was kept totally informal with no records. This was a big diplomatic victory for India and it showed the growing clout the country commands in most international forums.

But the UNSC meeting was just the beginning. Pakistan, and China firing from its shoulders, will continue to raise this issue on all international platforms, maybe even requisition another UNSC meeting on it. Pakistan has decided to internationalize the issue as its main plank of countering India's move of reading down Article 370 (apart from making its proxy war more vigorous, destabilizing the Valley by activating its sleeper cells once communication is restored and flexing its muscles on the LoC). But as long as the Valley is peaceful without any major incident, most countries will continue to favour India and say that it is India's internal matter. Pakistan will not receive much traction for its efforts. Pakistan's Foreign Minister Shah Mahmood Qureshi admitted as much when he asked the country not to live in a "fool's paradise" to think that the UNSC or any other body will welcome them "with garlands".

But things can change fast if the Valley erupts once restrictions are removed and there are daily violent protests and retaliatory action by the security forces that result in loss of lives. Pakistan and China will be quick to call it genocide and demand interference of the international community and action against India. Till now, the Indian government has kept things in check due to the restrictions. There are reports that potential mischief-makers (like stone pelters and others who can incite mobs, including religious leaders) are being identified and isolated and being taken into preventive custody, sometimes in a highhanded manner. But since the government is handling the matter on the premise that the common person is not against the move (there is no other option, is there?), it has to do everything under its command to prevent an uprising instigated by hotheads and Pakistani stooges.

The government has to reach out to the people and win them over. The Prime Minister made an effort in his address to the nation but sadly, due to the communication blackout, no one in J&K could hear what he had to say. It will not be an easy thing to make Kashmiris accept the move as the people in the Valley have been brainwashed into believing that Article 370 was sacrosanct and they were special and had the right to decide about their future even after letting India spend enormous sums of money for their well-being for 70 long years. A communal angle is also being infused that can make the issue highly dangerous. But the restrictions cannot continue for long. The political leaders will also have to be freed soon. They will try to rally the people against the move. Rumours will be spread once communication is restored. Pakistan will redouble its efforts to destabilize the region. It will need extreme sagacity on part of the government and utmost restraint by the security forces to ensure that there are no deaths in retaliatory action. If Kashmir becomes a battle zone, those who support India might well revise their decision. Then it will become very difficult for it to sustain the move to read down Article 370.