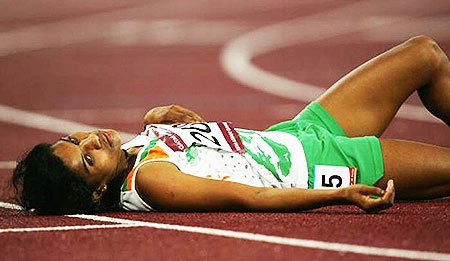 Editor-in-Chief of indiacommentary.com. Current Affairs analyst and political commentator. Writes for a number of publications. View all posts by this Author
The O P Jaisha case is getting curiouser and curiouser. The athlete had complained that Athletics Federation of India (AFI) officials had not provided her with water and permitted energy drinks during the marathon event in which she participated. At first, it seemed like another case of official apathy that has become so common in Indian sports. But further disclosures have queered the pitch somewhat, making it a case of misunderstandings at best and frustration at worst. Jaisha testing positive for H1N1 virus on returning from Brazil has added another element to the issue.

Jaisha is the national record holder in marathon. She was obviously hoping to perform well at the event in Rio. But when she passed out at the finishing line after running an ordinary race and finishing 89th, she could not bear it. Her reaction of blaming the officials could have been a result of her frustration. As she has tested positive for H1N1, she could also have passed out if the virus was present in her body then, as she was dehydrated after the grueling race.

For, her coach Nikolai Snesarev has said that although Jaisha never prefers to have energy drinks during a race and does not drink personal water, depending on the fluids provided by organizers, given the importance of the Olympics, he had specifically asked her if she needed drinks during the race and informed AFI officials when she replied in the negative. While there are attempts at saving ones back in India during any inquiry, one feels that a foreign coach will not lie as he is a contractual appointee not having anything to do with the politics of Indian sports officials.

Further, International Amateur Athletics Federation (IAAF) has also taken cognizance of Jaishas allegation that there were lesser water points in the latter part of the race. They have issued a statement saying that upon inquiry from the Rio organizing committee, they have ascertained that water stations were provided at the following points: 2.5 km, 7.5 km, 12.5 km, 17.5 km, 22.5 km, 27.5 km, 32.5 km, 37.5 km and 40 km, plus of course at the start and finish. Hence, there seems to be no truth in Jaishas complaint about her getting water at only the 8 km mark, especially since the other marathon runner from India, Kavita Raut, has confirmed that water was available as per IAAFs report. Availability of water at every 5 km distance is more than enough and if any athlete has special requirements he or she has to inform officials beforehand, which Jaisha does not seem to have done. Her running history also shows that she does not have special needs and is satisfied with normal water provided by organizers.

So was there official apathy as Jaisha alleges or is it a case of the frustration of an athlete, after running a race well below her capability, coming to the fore? There must have been a video recording of the race. Let a committee examine the footage and see how many water points Jaisha passed and where she stopped to drink. The truth will be out.