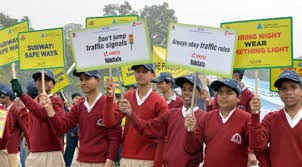 Editor-in-Chief of indiacommentary.com. Current Affairs analyst and political commentator. Writes for a number of publications. View all posts by this Author
The annual, and perhaps ritualistic, Road Safety Week was held this year against the backdrop of a controversial court decision in one of the most celebrated hit and run cases of recent times. Salman Khan was let-off by the Bombay High Court after the Mumbai police was seen as having botched up investigations to allow the actor to escape punishment for his misdeed. Further, even as the week was being observed, an Audi ran over and killed an IAF officer who was on Republic Day parade rehearsal duty in Kolkata. Hence, it is questionable whether anything of substance is achieved by holding the annual event, which is increasingly being seen as an opportunity for ministers and bureaucrats to sermonize and is wasteful expenditure.

Considering the high rate of casualty on Indian roads, road safety should be an on-going process. The time has come to dispense with this event and brainstorm about how the citizens can be involved in being aware and alert 365 days of the year. It serves no purpose for the traffic police to enforce rules just this one week and lapse into usual mode thereafter. It also serves no purpose to have school children and other volunteers stand at traffic crossing for a week with banners (half of them do not understand what is written on them) and shake them at passing cars.

The problems and violations that lead to road deaths are well known. The solutions, although not enforceable at times (like clearing pavements of hawkers and allowing pedestrians to walk on them) due to lack of political will, are also known. It is only lax enforcement that results in many deaths. For instance, the Calcutta High Court has ordered that there should be no hawkers within 100 metres of a street crossing. It is a sane order as important crossings have traffic, sometimes at good speed, taking turns. If pavements are occupied by hawkers at such points and people walk on the road, chances of accidents increase manifold. Yet, everyday, new hawkers setup shop at all crossings and the administration does nothing â after all, one hawker means 5 to 7 votes (and funds in the party coffers), court order be damned.

Traffic police are conspicuous by their absence on stretches that are prone to accidents. Apart from the customary sign that advises people to drive slow as the area is accident prone, there is no monitoring to see if people are actually driving slowly. If accidents happen frequently on a stretch of road, is it not required to monitor movement of traffic closely? But policing is done on congested roads where commercial vehicles ply, as that is the area where maximum palms can be greased. After all, monitoring 100 trucks is a far better earning option than catching a stray car that might be speeding down a forlorn stretch. Performance in police parlance is not by number of lives saved but by the amount submitted to higher ups.

That aside, safety is an issue that has to come from within. Citizens are so callous that they do not think twice before running across the road, with children in tow, to catch a bus on the opposite flank. Pray, that is not the last bus to your destination but it could very well be the last run of your life. We closely examine the fine print on our medicine strips to check the expiry dates, but once on the road, we abandon prudence as if there is no tomorrow. Crossing a barricaded stretch by removing the barricade, entering a one-way street from the wrong side, speeding, crossing the road from anywhere but the zebra crossing â you name the traffic violation and Indians indulge in it. If traffic rules were strictly enforced, every single commuter and vehicle driver would be fined several times a day and the governmentâs coffers would be bulging with cash. But the police are not staffed adequately to catch all. Hence the complete state of confusion and a rally like atmosphere on roads in Indian towns and cities. Driving and commuting both are a daily pain which everyone has to endure, yet no one does anything about it.

But the government can do a lot if it wants, in addition to the Road Safety Bill it has on the anvil. For starters, it can enforce the court order of not having hawkers within 100 metres of street crossings. Then, it can make one class on road safety every month compulsory in all schools for students of class 9 and above, as they will start driving gearless two wheelers at 16 and others vehicles when they pass out of class 12 at 18 years. These children should be encouraged to impart what they learn to their parents at home. Policing on killer stretches should be increased. Investigations into hit and run cases, especially if they involve celebrities or the rich, should not be botched up. Traffic police should be instructed to observe each day as road safety day. More cameras should be installed at important crossings and on killer stretches and bends to identify offenders. If people feel that the government means business, violations will drop and the roads will become safer.