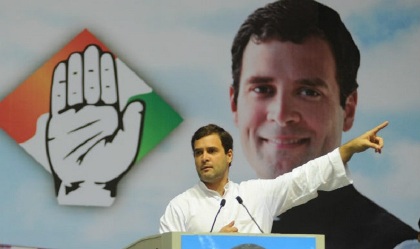 Rahul Gandhi has reiterated that he has resigned as the president of the Congress party. It is good that the man had the courage to own up responsibility for the dismal showing of the party in the recent general elections. But what was not good was his decrying that he found himself alone at most times. In parties run by dynasties, where the family is supreme and transcends all else, if success is savored alone by the Scion, failures must also be rued by him or her alone. If Rahul thought it was his success in Rajasthan, Madhya Pradesh and Chhattisgarh, he must now also think that it was his failure in the general elections. Those praising his resignation as a brave act must realize that anything short of that would have been shamelessness.

When was the last time one heard of any Congress leader other than Rahul, Sonia or Priyanka being given any earth-shaking responsibility? Which other Congress leader was assigned to address 125 rallies, or even 50? Were Manmohan Singh and P Chidambaram, to name just two leaders, asked to campaign extensively? Was the family willing to allow other leaders to share the limelight or was it more interested in projecting Rahul? Do any of the other Congress leaders matter at all to the family? Are their views even considered? The family often presents them with a done deal and they are expected to nod their heads in agreement.

In such a scenario, if Rahul Gandhi found himself alone, he must now think about why it happened. The Congress party has never allowed grassroots leaders to establish themselves. Take the recent case of Punjab. A turncoat like Navjot Singh Sidhu was allowed a free run to cut the roots of Amrinder Singh until the Captain put his foot down. The past history of the party is replete with instances of popular state-level leaders, who had the potential of becoming a threat to the family, getting their wings clipped by deputies specially appointed for the purpose by the so-called high command. A party of yes-men will always leave the leader feeling alone.

Now that Rahul has said that he will not reconsider his decision, inner-party democracy must be restored in the Congress party. First and foremost, it must ensure that a yes-man is not selected to helm the party. Then, it must hold elections for office bearers from the lowest rung of the party hierarchy. They must be true elections and not shams where only chosen people are allowed to file their nominations and are elected unopposed. Grassroots leaders must be given prominence and they must be given a free hand to rebuild the party.

If the party has any pretensions of being the main opposition and a strong challenger to the BJP from now on, it must rid itself of the power brokers the late Rajiv Gandhi spoke about (but could not do anything to remove them) and allow dedicated fresh faces to take charge. If the BJP can go down to just 2 MPs and recover to get two successive shots at governing the country, the Congress can recover too, provided it works hard, ticks all the right boxes and the family is willing to loosen its grip over the party.