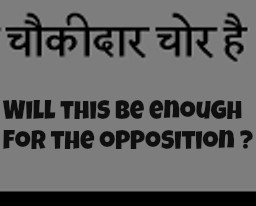 Editor-in-Chief of indiacommentary.com. Current Affairs analyst and political commentator. Writes for a number of publications. View all posts by this Author
Although the country, especially the political parties, were in election mode for the last six months, with the announcement of the schedule for the 2019 general elections, things are now going to hot up. With just a month to go before the first phase of polling takes place, the time has now come for the parties to woo the voter in real earnest. If one takes stock of the party-wise situation, it seems that only the BJP, the TMC, the BJD, the TRS and the SP-BSP combine in UP have things sewn up in a confident manner. The Congress, despite its recent victories in four states, has been unable to stitch together any meaningful alliances. It thinks going alone will be better but it will only end up dividing the opposition vote and bring cheer to the BJP. The mahagathbandhan, apart from the sound and fury it generated, has been a non-starter. The parties that were to form it have not even reviewed and passed a common minimum programme as yet.

The Pulwama terror attack and the subsequent response by the armed forces have given the ruling dispensation an upper hand and taken the winds out of the sails of the opposition. Although the NDA, especially the BJP, stands accused to milking the surgical strikes  essentially a military response  politically, the opposition is also guilty of allowing them to raise it to such a pitch that it has pushed away all other burning issues like unemployment, the slowdown in the economy and farm distress. The opposition has failed to come up with a coherent response to the military action. By demanding proof, first of the strikes and then of the number of terrorists killed, the opposition has alienated itself with a large section of voters and allowed the BJP to run away with all the credit.

There is still time. The opposition has to change the discourse from the nationalist jingoism to the failures of the government. But is it capable of doing so? Rahul Gandhi has a one-point agenda of trying to corner Modi on the alleged corruption and nepotism in the Rafale deal. It is very difficult to hit Modi on corruption mainly because public memory is not that short to not remember the multiple big-ticket scams under UPA II and compare it with the near absence of such scams in the last five years. Rahul has opened the wrong front to fight Modi. He cannot nail him on corruption. It is the failures of the government he should be highlighting.

The SP-BSP combine is going to cause the maximum damage to the BJP. If their votes combine, which they are likely to, the BJP might end up losing more than 30-35 seats in UP at a very conservative estimate. The Ram Mandir issue has not been resolved and in the absence of jobs, the last minute effort to woo upper caste Hindus with the job quota might backfire. The atrocities on dalits and backwards all over India by fringe elements has caused deep distress in UP and it seems Amit Shah will not be able to swing their votes this time. It remains to be seen if the BJP manages to minimize the damage by arousing nationalist fervor in its favour by harping on the surgical strikes.

The polls show an increase in Prime Minister Modis approval ratings after the Pulwama attack. A large section of the population has approved the way the government handled the situation and came up with a response that exposed Pakistan. The BJP has also effectively managed to show the opposition in a bad light for their response in demanding proof of the strikes. This has hit the opposition hard and they are still unable to come up with a proper response. As the campaign enters the home stretch, the BJP is going to pitch itself as the only party that takes hard decisions to protect the nation. It will continue to denigrate what Modi called a mahamilavat alliance. The opposition has to come up with a solid response and chowkidar chor hai will not do.