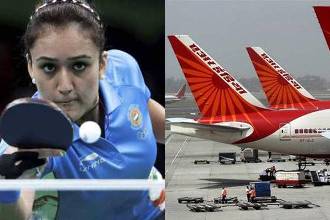 Editor-in-Chief of indiacommentary.com. Current Affairs analyst and political commentator. Writes for a number of publications. View all posts by this Author
It was shameful that a part of the Indian table tennis contingent going for an international tournament in Australia was not allowed to board the Air India flight to Melbourne from New Delhi airport. But the mistake is not only on part of the airline. The Table Tennis Federation of India (TTFI) should have informed the airline in advance about the teams travel plans. It should also have informed the players  as the group was large  to check-in and board the flight as early as possible. Mandarins in TTFI should have been aware that overbooking of fights is a usual practice resorted to by airlines in order to cut losses from last minute cancellations and no-shows. Hence, they should have taken precautions.

As for Air India, even if it did not know about the team boarding the flight, once it came to know during boarding it could have requested other passengers to voluntarily get off after promising them alternate travel arrangements as soon as possible. As it was a question of just 5 or 6 seats, one is sure that some passengers might have cooperated. But the airline acted haughtily and did not take any initiative to try and put the players on board. After that, it compounded the mistake by putting up the already stressed and disappointed players in a below-standard hotel near the airport. After the United Airlines asked marshalls to bodily remove a passenger from one of its flights last year, the lens is squarely upon the practice of overbooking. Airlines are expected to treat confirmed passengers they deny boarding rights well.

Was it because it was the table tennis team that Air India could get away with it? Could it have done the same to the Indian cricket team? The answers, obviously, are yes to the first question and no to the second. The incident provides lessons all around. Sports federations must inform airlines well in advance about team departures so that such denial of boarding does not take place. Players must check-in and board early. Airlines must provide at least four-star accommodation with transportation and meals to confirmed ticket passengers denied boarding till they are put on another flight, or else compensate them monetarily as per DGCA rules. If airlines overbook to cut losses, they must be prepared to bear the consequences if situations such as the above arise.