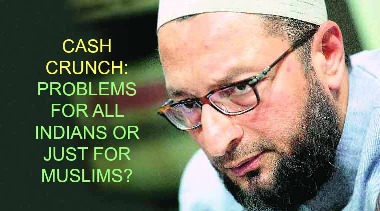 Editor-in-Chief of indiacommentary.com. Current Affairs analyst and political commentator. Writes for a number of publications. View all posts by this Author
Asaduddin Owaisi is trying to introduce a dangerous communal divide regarding distribution of new currency after demonetization. He has said that banks are not disbursing new currency notes in Muslim dominated areas. At a time when all Indians are grappling with restrictions on cash withdrawals and botched up new currency delivery mechanism, Owaisis allegation is in extreme bad taste and highly mischievous. Leaders of Muslim community have always tried to give communal colours to problems that are faced by almost all Indians in the same social and economic strata. What is essentially due to general social malaise is sought to be taken as an affront to the Muslims. This is a calculated ploy by these leaders to keep the Muslims separate from the mainstream and build a sense of insecurity among them.

One is surprised that these leaders have been able to carry out their false propaganda for so long. For, ordinary Muslims must be watching their Hindu neighbours grapple with the same problem every day. If a Muslim stands in an ATM queue for 6 to 8 hours, he knows his Hindu neighbor is also doing the same. He does not feel any discrimination for this, solely on account of his faith. It is only these unworthy leaders that are trying to poison the minds of ordinary folks. This inculcates a seize mentality which is never good for peace among communities. But then, such leaders thrive on this.

Owaisi would do well to educate Muslims about the need to adopt technology and go digital. He should educate them about the need to accept and make payments through banking channels and file their income tax returns. He should tell them that the future is in doing business in a legal way by taking out licenses where mandatory and conduct transactions transparently. This is what needs to be told to all Indians, but since Owaisi projects himself as the champion of the Muslims, he should do that in the community. It is good that the raids that have been carried out post demonetization have not been done on big Muslim traders, businessmen, doctors or lawyers. Otherwise, people like Owaisi would have immediately suggested that Muslims are being targeted.

The sooner people  mainly politicians  realize that the fight against corruption, black money and illegal businesses is not along communal or regional lines, the better for India. There are corrupt politicians and officials and illegal businessmen in all communities and regions. If we dream of an India that provides equal opportunities for all its citizens, we need to weed out such people and close down such businesses. For, they are destroying the economy, using the costly infrastructure created with the money of honest taxpayers without contributing a single paisa in return. The sooner India punishes these freeloaders the better for its future generations. But the government will not be able to bring about this transformational change alone. Society has to contribute wholeheartedly by exposing them. Hence, Owaisi should desist from dividing people over something that India must do.