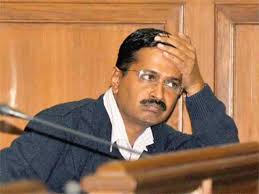 People Will Suffer As Kejriwal Refuses To Shed Confrontationist Attitude

People Will Suffer As Kejriwal Refuses To Shed Confrontationist Attitude

Editor-in-Chief of indiacommentary.com. Current Affairs analyst and political commentator. Writes for a number of publications. View all posts by this Author
As is his wont, Arvind Kejriwal has adopted a confrontationist attitude after the Supreme Court verdict, despite the apex court having said that both obstruction by the Lieutenant Governor and anarchism by the Delhi chief minister were wrong. Kejriwal fails to realize that confrontation on his part leads to anarchy as, driven by megalomania, he tries to get things done his way, come what may.

Two acts of Kejriwal and his deputy chief minister Manish Sisodia prove this. The first decision that the Delhi government took after the verdict, signed by Sisodia, was to issue new rules that authorized the chief minister to transfer all officers posted under the Delhi government. It was promptly rejected by the chief secretary as being legally incorrect. The reason was that the SC order had not cancelled the union home ministry notification of May 2015 that had assigned the job to the Lt. Governor. Obviously the self-styled know-alls in AAP did not think it fit to get legal advice or read the fine print in the SC order before putting out the new rule. Further, it was a blatantly confrontationist order that tried to show the officers who was the boss.

Then, Kejriwal has written a four page letter to the Lt. Governor saying that his concurrence will no longer be needed and files need not be sent to him any longer. As a lollipop, he has told the governor that he will be kept in the loop about all the decisions taken by the government. It is like a grandson entering the family business and telling the patriarch that you are now being retired, we will inform you what we are doing but your consent will not be taken. But governments guided by the constitution do not work that way. Despite the SC order, there are many areas where the Lt. Governors nod will be needed. Delhi is not a state  the apex court said this in no uncertain terms  and its elected government does not have the powers that governments of full states have. If Kejriwal tries to see beyond his own nose, he will find that the SC order has advised a path of cooperation. But Kejriwal, as usual, is itching for a fight and despite his claims of the Centre not allowing him to work, it is his own nature that is harming the interests of the people of Delhi.

The best way forward for the Delhi government is to seek legal advice and understand the fine print in the SC order. For, it is clear that the order has just reiterated the constitutional position as it stands. It has neither read down any provisions nor has it quashed the orders issued by the Centre. Kejriwal and the Lt. Governor must sit together to work out a way so that the government can function smoothly. It is not as if Kejriwal is the first chief minister of Delhi. Sheila Dikshit of the Congress had the NDA at the Centre during the first five years of her tenure as the CM and Madan Lal Khurana and Sahib Singh Verma of the BJP smoothly ruled Delhi from 1993 to 1998 when Congress and United Front were in power at the Centre. There was no confrontation then.